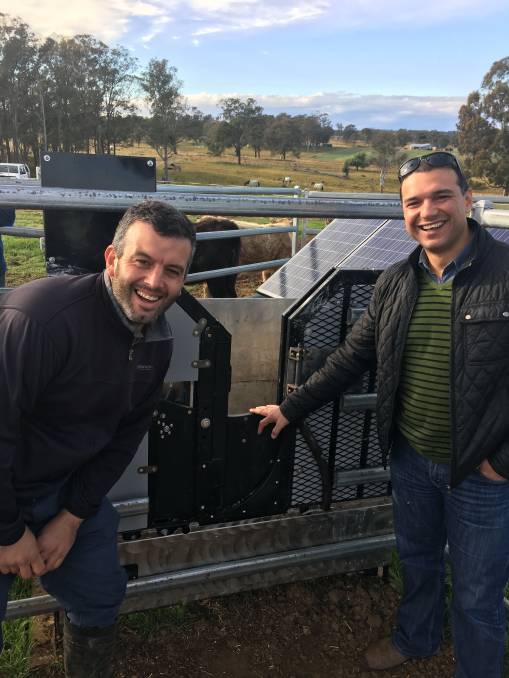 BETTER BEEF: Luciano Gonzalez and Augusto Imaz from the University of Sydney are investigating how to make Australia's cattle herd cattle neutral.

NEW research suggests the Australian beef industry is on track achieve its goal of becoming carbon neutral if it adopts improved management practices, including feed supplementation.

Associate Professor Luciano Gonzalez from the University of Sydney said early research being conducted in conjunction with the 4 Season animal nutrition company showed that methane emissions could be cut by half by improving feed digestion and better managing methane producing bacteria found in the rumen.

Methane is a byproduct of rumen bacteria breaking down plant fibre as part of the digestive process. The greenhouse house typically escapes the rumen when the animal burps.

However, higher quality feeds minimise the amount of methane produced in the digestive process, resulting in greater feed efficiency and increased productivity, all within a shorter time frame.

Greenhouse gas emissions from beef herds continues to be in the spotlight for supply chains, consumers, the public and policy makers. - Assoc Prof Luciano Gonzalez, University of Sydney

Assoc Prof Gonzalez said when improved feed digestion was combined with improvements in cattle productivity, carbon being sequestered in the vegetation and soils of grazing systems, and the oxidation of methane by soil bacteria, the result was a carbon neutral Australian beef industry.

“Greenhouse gas emissions from beef herds continues to be in the spotlight for supply chains, consumers, the public and policy makers,” Assoc Prof Gonzalez said.

“This is one of the many challenges facing beef producers, who needing transformational solutions to change the way the industry is perceived.

“A carbon neutral status would put Australia head and shoulders above its competitors, giving consumers even more confidence in the quality and integrity of Australian red meat and turning environmental criticism of the industry on its head,” Mr Norton said.

“With industry commitment, the right policy settings and new investment in research, development and adoption, the Australian red meat industry can be carbon neutral by 2030,” Mr Norton said.

“And we can be the first red meat exporting nation to do so.”

MLA has initiated a project with CSIRO to identify pathways for the red meat industry including processors to become carbon neutral. Those options include feed supplements, feedlotting and vegetation management, the expanded use of legumes and dung beetles in pastures, and savannah fire management in northern Australia. Genetic selection and a potential vaccine to reduce methane production in the rumen are recognised as other opportunities.