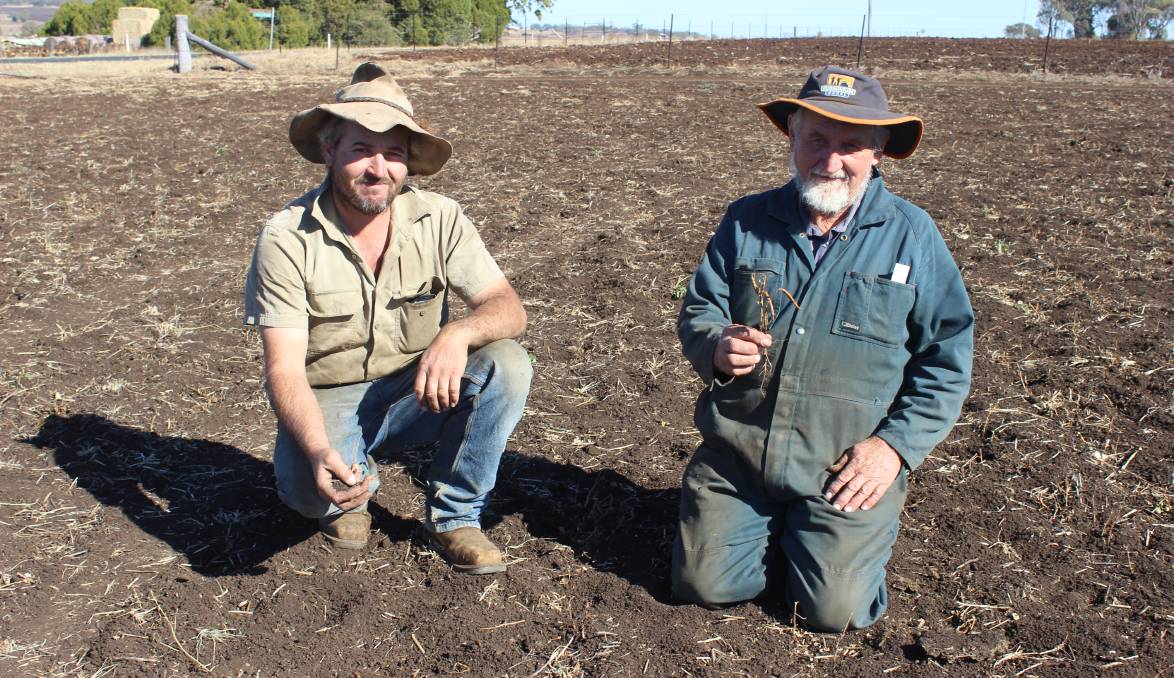 Bare Paddocks: Joshua and Melvin Mengel, Kia-Ora, Nobby, are looking down the barrel of another tough season while they wait for some much needed rain to plant their winter wheat and barley. Photo: Helen Walker

It was the driest summer Melvin Mengel has experienced for 39 years.

Nobby district farmer Melvin Mengel looks to the blue sky above as he speaks about experiencing some previous dry winters, but the past two summers have been the driest he has experienced for the past 39 years of his farming life.

Mr Mengel has been farming Kia-Ora, the family property since 1969 and now farms in partnership with son Joshua who represents the fifth generation since the family settled the country in the 1880s.

In a normal season the father and son duo farm 243 hectares in a fifty-fifty ratio to their summer and winter plantings.

“Our main summer planting is corn, and if we receive later rain we plant millet and sunflowers, while mungbeans are grown as a cover over our winter wheat and barley stubble,” Mr Mengel said.

“But for the past two summers the seasons have been far from normal and we have had no financial return of our summer planting.”

The Mengels planted their corn with minimal moisture after receiving 50mm of rain in late November before mother nature struck.

“We managed to grow the corn to a metre high and then it died due to lack of sub-soil moisture, so we cut it and made it into silage,” Mr Mengel said.

Like many farmers on the Darling Downs and southern Downs the last good rain was received from ex tropical cyclone Debbie some 15 months ago.

After the downpour from Debbie, the Mengels planted wheat and barley, along with some oats as forage for the progeny to grow out on.

“By September with no spring rain in sight the crops started struggling before being smashed to the ground by a severe hail storm in October,” he said.

The only saving grace to the family’s income has been the sale of the progeny from the 45 Hereford/Angus/ Brahman cross breeders they run on their waterways and grass country.

“We sell all steers and heifers and they are consigned directly to JBS at Dinmore,” Mr Mengel said.

“We did too get a good result from our sunflower crop that was planted late in the season last year as well.

“It too, was struggling until Debbie dropped 125mm just as they were flowering, and that was what got them through.

“It really was a fluke as at the time they were worth $1250 per tonne which was a blessing to us.”

With two failed summer plantings and a failed winter crop behind them the family are now looking down the barrel of another tough winter without a crop.

“We can leave it as late as early July to plant wheat and barley but we need to receive a lot of rain before then to get our moisture profile in the ground,” Mr Mengel said.

In anticipation that it will rain again one day the Mengels are occupying their time building a no-till precision air planter which is nearly complete.

“We just need to source a few parts like a transmission from the USA, and it is finished,‘ Mr Mengel said.

“It will rain one day and we will have stubble and a new machine available for us to plant into our no-till farming country.”