Your voices, your state, your livelihood: See the wrap of all the meetings around the state this week.

THE State Development, Natural Resources and Agricultural Industry Development committee made its way around the state this week, holding Parliamentary hearings in five locations to hear the views of stakeholders on the proposed vegetation management legislation amendments.

Here’s our rundown from the week.

Amongst the speakers was Dr Bill Burrows, former principal scientist for the Department of Agriculture and Fisheries. 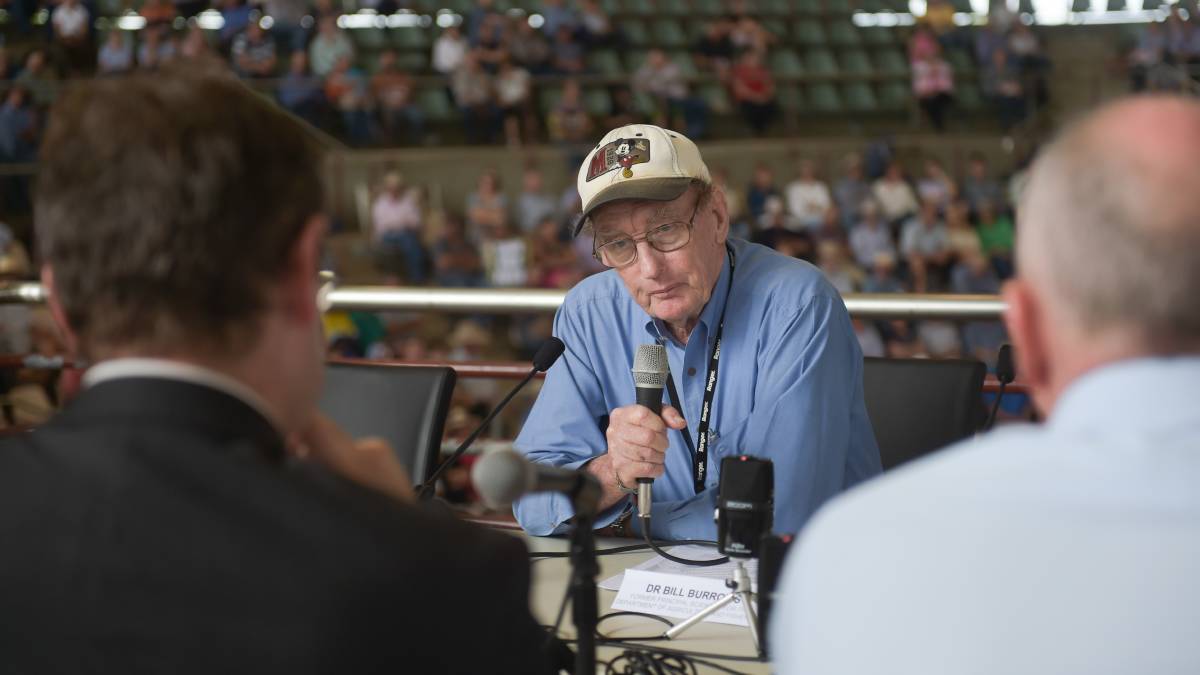 Dr Burrows was one of the most outspoken speakers on the day, and drew continual applause from the more than 400 landholders present at the meeting.

He spoke at length about the 40 years of work he completed researching Queensland’s grazed vegetation, and said he was appalled none of his or his colleague’s research was taken into account.

“Cherry picking what research is presented to legislators is not good science, it is advocacy driven by agendas,” he said.

”The foxes are in charge of the hen house.”

Also making an impression on the crowd was Josie Angus, Kimberley Station, Clermont. The minute Ms Angus began speaking at the CQLX complex in Gracemere, a hush fell over the crowd.

Her strong and heartfelt message, backed by science, research, and facts, was one of the strong presentations made on the day.

“We own 162,000 hectares in central and northern Queensland over which we run an award-winning beef business. We’ve developed 17 per cent of our land, and this legislation takes away 10 per cent of that 17 per cent,” she said. 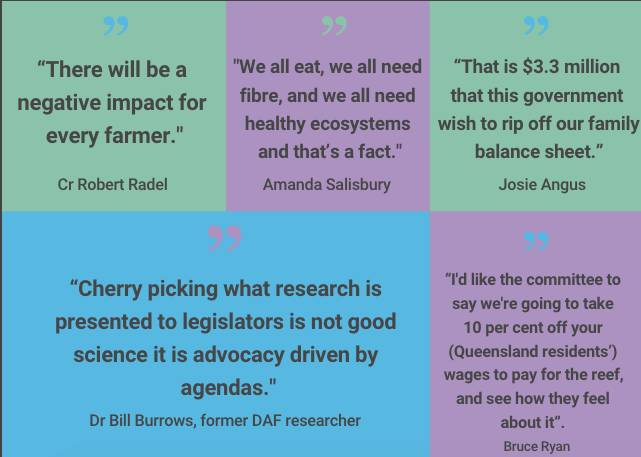 “I’d like you to turn to page 14 of my submission – it shows what our developed country looks like… we have cattle breeding in these paddocks which have now been mapped by a computer… as high value regrowth.

“Simply because we conserved some shade trees. What do those 2700 hectares mean for us?

“Our last valuation showed a differential of $1250 between our developed and undeveloped land.

“That is $3.3 million that this government wish to rip off our family balance sheet.”

See the full Rockhampton report here and photos of who attended here.

“This is the start of something big” is how Agforce cattle board director, Blair Knuth, described the rallies mounted this week to protest the Palaszczuk government’s proposed changes.

Speaking from Townsville before a background of placard-bearing farmers, Mr Knuth echoed the thoughts of many when he declared that he and fellow landholders had had enough of farmer-bashing in the state.

“It just seems to be from one lot of red tape and regulation to the next,” he said, declaring that with the government seemingly uninterested in the science surrounding land and vegetation management, people had no other choice than to protest to get their point across.” 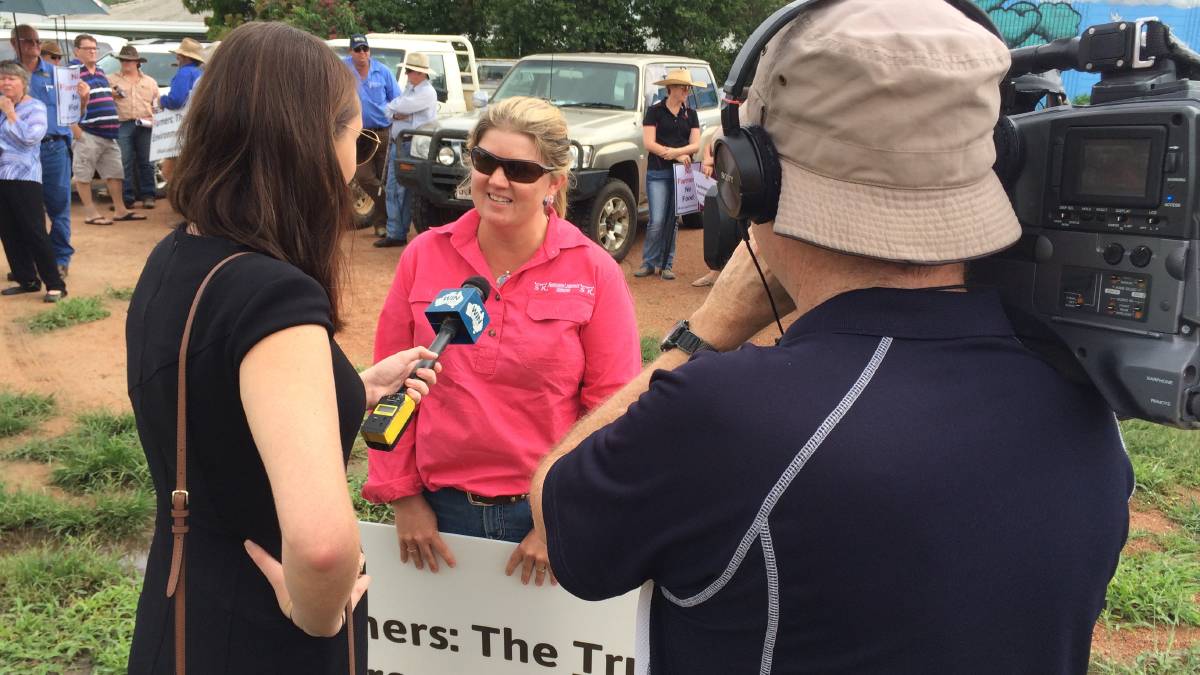 Charters Towers grazier, Kylie Stretton, at the Townsville protest prior to appearing before the Parliamentary hearing.

See the contributed photos from the event here.

Although it was a smaller gathering in Cloncurry, the message remained the same: “These laws are the worst of both worlds”.

Cloncurry Mayor Greg Campbell said the bill was a knee-jerk reaction to appease a Green minority in the city.

“This bill will make it harder for landholders to improve productivity,” Cr Campbell said.

Responsible environmental stewardship was the strong message pushed when the SDNRAIDC sat down to hear what western Queenslanders had to say at the Australian Stockman’s Hall of Fame at Longreach on Thursday morning. In a factual, non-emotional presentation, Dominic Burden, chairman of natural resource management group Desert Channels Queensland, told the hearing that if the government wanted to see vegetation managed well, it needed an outcomes based approach rather than a prescriptive one.

“By describing only the rules, without identifying the grazing and ecological outcomes sought, broad support for outcomes cannot be achieved,” he said.

Local government had a strong presence at Longreach, where Barcoo shire’s deputy mayor, Mike Pratt, said his shire, of which 40 per cent fell within the gidyea and mulga bioregion of Queensland, consisted mostly of large holdings faced with extensive development costs.

“New regulations which are clearly not ‘fit for purpose’ across Queensland let alone a remote region, impose an unfair, unaffordable, unnecessary and emotional burden on landholders struggling through prolonged drought and faced with an ever-increasing barrage of wild dogs and macropods,” he said.

Appearing for the Barcaldine Regional Council and Remote Area Planning and Development Board was mayor Rob Chandler, while Crs Trevor Smith and Leonie Nunn represented the Longreach Regional Council, along with deputy CEO Paul Hockings.

Outcomes that would be the opposite of what the government was trying to achieve were highlighted by Clermont grazier, Robyn Simmons, who made a 10 hour return trip to state her case. She told the hearing that category R regulations, which controlled clearing of native woody vegetation within 50 metres of a watercourse in the Burdekin, Mackay, Whitsunday and Wet Tropics Great Barrier Reef catchments, had a detrimental effect on erosion rather than preventing it.

She said this was because animals sought shade and so there was a higher concentration of them along shaded creeks and gullies, removing all the ground cover.

“We actually chose to leave more trees in our category X country because it was better for the environment,” she said.

See our photos from the Longreach hearing here and read our full report here. “What is being proposed is essentially forcing drought on these producers. It's wiping the balance sheet by a third or more overnight.”

That was the bold statement made by agribusiness specialist Lisa Lonsdale who travelled more than 800km to give evidence at the Charleville public hearing.

Ms Lonsdale’s financial industry information complemented the impact statements given by local producers recovering from their sixth year of drought.

A panel of 16 people spoke at the Charleville Town Hall including local abattoir owners, graziers and indigenous ancestors. Rob Moore, Grassmere, Mitchell, was interrupted by a rousing applause during his speech as he spoke of the disregard towards primary producers.

"Every second advert on TV is about Beyond Blue, Lifeline, Black Dog...these vegetation acts are sinister, sleazy and just plain bullying,” he said.

“My concern is for the human species out here: 240-plus on the dole here in Charleville, most of them in their prime years. What same government would put the likes of me and my contractor and his staff in the same position?”

But the quote of the day, based on crowd support, had to go to Scott Sargood, Halton Station, Charleville: "I've never been able to not work out anything in my life, it's the people I'm working with who can't work it out.”

Read more from the hearing here.