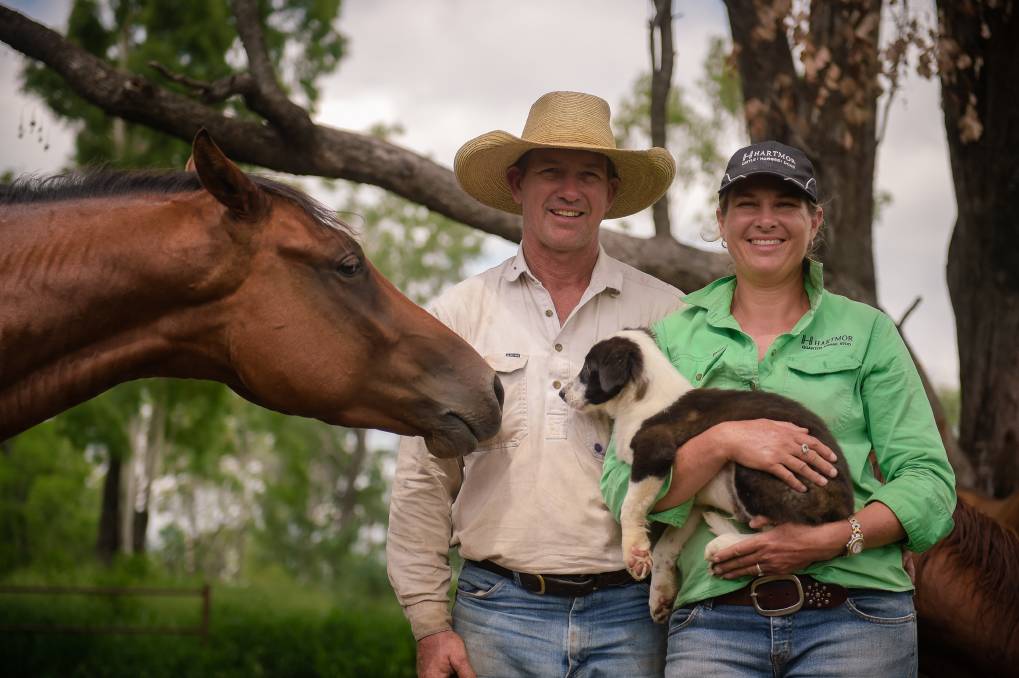 Scott and Michelle Hartwig at home at Goolara Siding, Theodore. Mrs Hartwig said the busy operation was “just trying to do more of the same while the cattle prices are there". Photo - Kelly Butterworth.

SCOTT and Michelle Hartwig have just re-signed a short-term agistment contract, but like many producers, they are constantly on the lookout for more land.

The Hartwigs operate Hartmor Cattle, Horses, and Dogs at Goolara Siding, Theodore. In conjunction with Scott’s parents Blue and Cheryl Robson they also have a 28,327 hectare (70,000 acre) cattle breeding block west of Taroom.

While they just re-negotiated a short-term agistment opportunity in the Taroom region, Ms Hartwig said they are “always looking for agistment”.

“We can never have enough,” she laughed.

While rain in the west did lift hopes of some land becoming available, the lack of followup quickly put those hopes to bed. With no extra land to fatten on, Mr Hartwig said in the past few years the operation had shifted towards selling weaners straight off their mothers.

“We'll be selling weaners straight off mum unless we can (secure) another agistment block somewhere,” he said.

“And then they go to Roma saleyards. We don't actually get to that feeder weight - not many steers would get there, they'd be almost feed-on growing steers… we’re selling to backgrounders.”

At the cattle block the family run between 1000 and 1200 breeders, with predominantly Charbray/Brahman cows.

They recently have been buying in a lot of young Brahman polled bulls, something Mr Hartwig said was working in the operation.

“It's a forestry block so we don't try to buy two year old bulls, we buy the little fellas and just let them grow up,” he said.

“We run bulls all year round because it is pretty hard to manage as far as mustering availability.”

After moving towards helicopter mustering, he said their time efficiency had improved by 90 per cent.

”We still walk our cattle everywhere and as long as we keep doing that we'll be right,” he said.

“I think once you start taking them to the yards with the choppers - well, there's no future in that.” They purchased Goolara Siding in 2005, and also have a 50 hectare block in the Theodore region for their horse breeding.

Ms Hartwig said keeping up with the kids, cattle, horses, dogs, hay operation and her own consultancy firm was “a juggling act”.

“We have a lot of weaner horses coming through now, and then we're thinking about putting another pivot on here to expand our hay operation a little bit.”

Elders Blackall manager Des Cuffe said despite recent rain in the west much more would be needed before land became available for agistment.

“The biggest problem with a lot of this country is it has only had that one fall,” Mr Cuffe said.

“It hasn’t responded to that fall, although a few narrow strips did just get good rain around the Tambo region.

“Then sort of west of here there was a couple of spots which had a couple of inches on Wednesday and Friday night, so that will get that country moving.”

He said with local producers also desperate for agistment land, he’d been “looking everywhere to find it”.

In areas which are seeing some green pick come up, Mr Caffe said a lot of producers are opting to buy stock themselves instead of putting it out for agistment.

“Sadly, without sounding ungrateful, it's the next rain that's going to make the difference for us here,” he said.

TopX Roma’s Lincoln McKinlay said it was a similar story in his region, and said some producers were willing to pay top dollar for agistment to finish higher value herds.

“There’s still plenty of people looking for agistment but there’s people that are looking to spend more money and want agistment for the likes of wagyus, we’re seeing a few people take that on,” he said.

“But other than that it’s pretty few and far between.

“I think most people are happy to have a blade of grass in front of them and they’re looking after their own cattle for a change.”