Alex and Jeff York's home, dubbed Victoria, as it stands now in Rolleston. The home was relocated from Springsure, where it was built in 1882.

Built in 1882, the York family's home is a historical delight mixed with modern ease and impeccable taste.

WHEN Alex York was just 18, she would drag her future husband around Springsure to stand in front of an old, rundown house to take photos of the sunset.

Now, that same house is their family home, with six children and a dog populating the completely renovated, immaculate homestead they have aptly dubbed Victoria. Arcadia York on the porch swing.

Approaching the home, the view is of the sprawling gardens, wrap-around verandahs, and a Christmas wreath recently added to the front door.

Inside you’re greeted with a long, white hallway, timber floors, and the ease of country chic decorating. Family photos line the hall walls, and the living area is a welcome delight of plush couches, wall-to-floor book cases, and wooden ladders to access the top-most books.

Alex and Jeff York moved into the house in 2010, just as the floods hit the Central Highlands, and upon arriving with five of their now six children in tow they were flooded in for six weeks.

When relocated to Rolleston from Springsure in two parts, the home was barely that. Instead it was a white ant infested, falling-to-pieces shell of a home with plenty of renovations yet to be done.

At one point the family were jumping in and out of the entrances with no stairs or verandah attached.

But now it is complete with the six York children, George, 13, Sidney, 12, Felicia, 10, twins Elliot and Olivia, eight, and Arcadia, six, filling up the home. The end of the girls' room.

The girls live in one open, white bedroom with pink trimmings. Floor-to-ceiling cupboards fill an entire wall – with an impressive 24 doors opening up into plenty of storage as their wardrobes grow. Another wooden ladder slides across a specially-designed horizontal pole for access to the upper storage. The boys are in the next room, with wooden bunks adorned with Akubras, cricket bats, and plenty of blue separating them from the girls. The boys have slightly less storage than the girls, but the smaller space is sparsely furnished, giving them plenty of room to move about. Outside it is the fire pit, sprawling gardens and large lawn which draws the kids outside. The back door opens up from the large laundry and school room, where Alex homeschools all six children.

The home serves as an integral part of the family story, as Arcardia became the first baby to be born in Rolleston in decades when she was born in the home. WHILE Alex and Jeff York’s home in the town of Rolleston may now be called Victoria, when it was built in 1882 in Springsure it was named The Pines.

The home was built for Mary Burke by her husband in the 1880s not long after they married, and the couple went on to raise six children there. Now Alex and Jeff raise their own six children in the very same home.

For Alex it was the history of the home and the beautiful construction that attracted her to building.

The couple had purchased their block in Rolleston and were looking for a home to relocate there when Jeff mentioned the search to a friend – who offered the then rundown cottage.

Alex said once the home was theirs and had been moved to Rolleston she began researching the history of it. Images of the two Victoria Bridges from 1874 and 1897, which both boasted the finials which were gifted to Alex, and are now part of the York's family home.

“Mary Burke was the daughter of the Irish publican who built the QA - and Jeff and I met at the QA so that's a bit romantic,” Alex laughed.

”There was a wall with a big double fireplace that we had to pull out before we moved it, and it had all these beautiful rocks which we've used as the edges for the gardens and the fire pit.

“When we pulled the mantles off the front of the fireplace, one which we have still inside, all this stuff fell out.”

Amongst the treasure trove of historic items was an attendance card from 1902 for Gerald Burke, Mark Burke’s youngest son, piqued Alex’s interest. 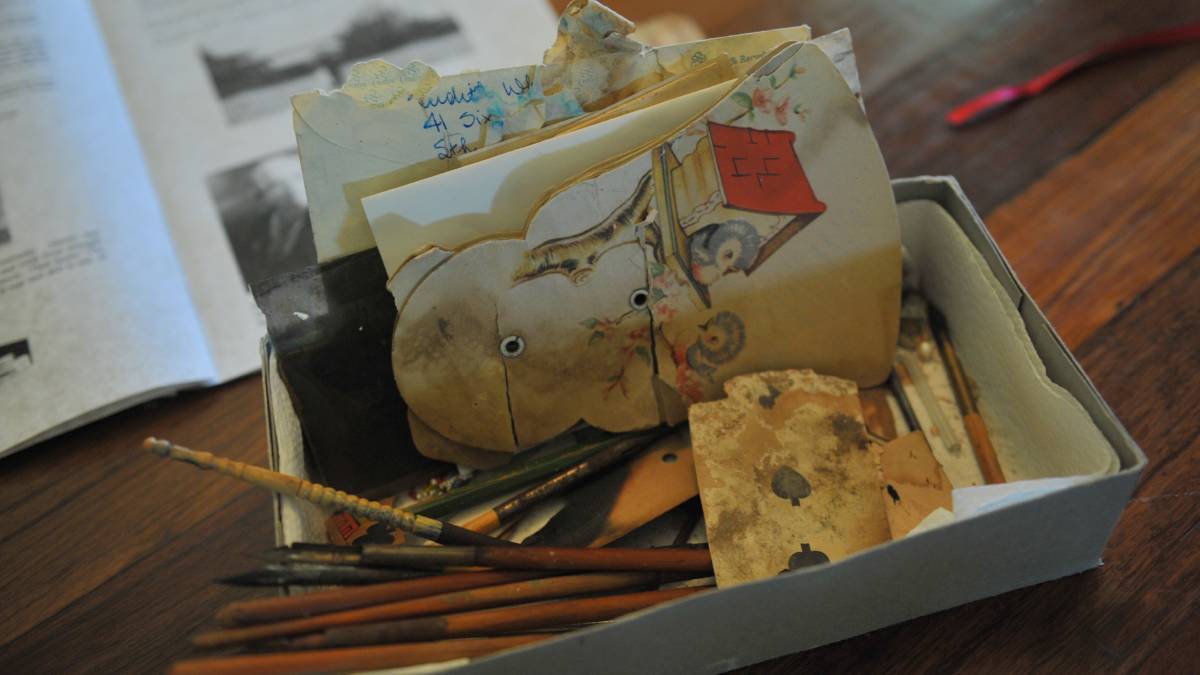 The box of lost treasures they found.

“He went and fought in World War I, and there's some photos of him at the opening of the Anzac Memorial in Springsure at the school,” Alex said.

Mary Burke went on to die in the home in 1941. After that, the home went to the Catholic Church where it was used as a refuge during the World War II.

Home is where the food lives Alex and Arcadia York in the family kitchen.

THE heart of the York family home is the kitchen, with wide doors opening straight out to the entertaining area on the verandah.

The hustle and bustle in the kitchen often surrounds a very well-designed drink station featuring a drinking tap straight from the wall to keep all six kids hydrated without dirtying the sink. Looking back towards the living area.

The kitchen runs alongside the living area in the home, and Alex said it was often here that you will find the family together, talking over food and drinks, and as the kids speed in and out.

The large stove was a must for Alex, with six hotplates, a roasting draw, and two ovens that have been in overdrive lately preparing jerky for Christmas.

Nestled in one corner, proving the kitchen isn’t all about the kids, is a coffee machine, which Alex said was as vital to the house as the stove and bathroom. The back of the home.