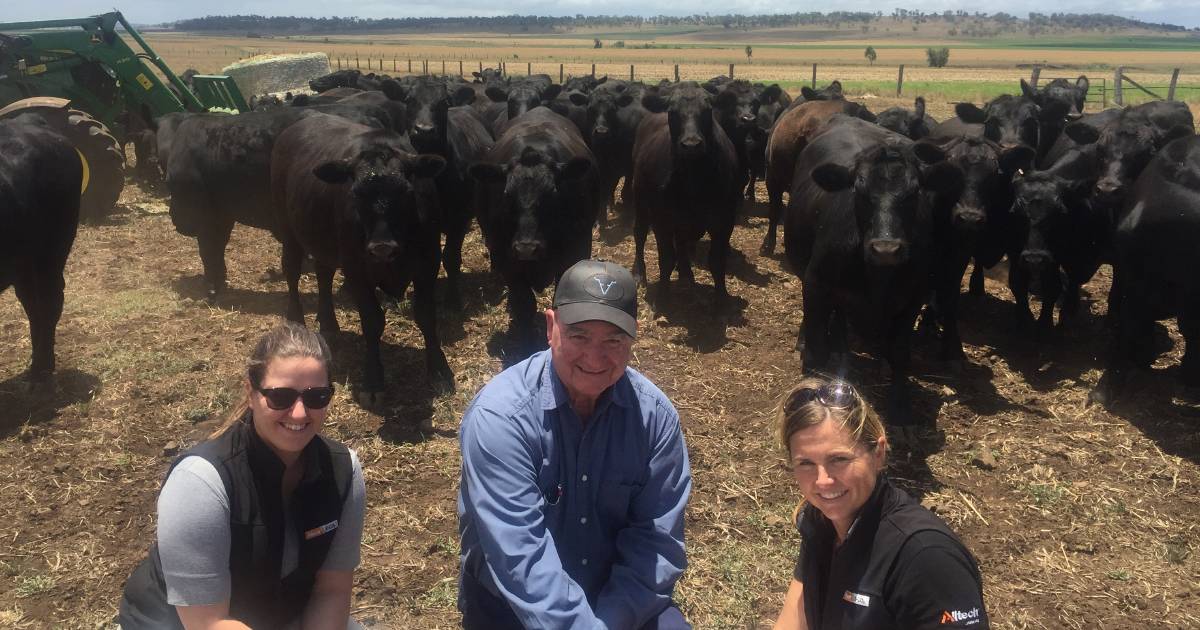 Biddeston beef producer Ken Baldwin is measuring his carbon footprint to increase the efficiency of his feeding program.

BIDDESTON cattle producer Ken Baldwin says he jumped at the opportunity to assess the carbon footprint of his beef operation on the basis it would help him to grow better cattle.

Mr Baldwin, who typically buys in a B-double of selected Angus steers each year to feed on his 146 hectare property Enterprise west of Toowoomba, said he was constantly amazed at how increased performance could be achieved by paying attention to the details.

I reckon it is my job as a beef producers to do everything I can to maximise that potential. - Ken Baldwin

“I’ve been working with the team from Alltech for a quite and a while and I think we have a pretty good system,” Mr Baldwin said.

“We know how the cattle perform in terms of genetics, so I reckon it is my job as a beef producers to do everything I can to maximise that potential.

“The thing I really love about farming is that we can always improve. I can see a big benefit in converting emissions into more beef. That has to be a better way to go, especially when it is directly linked to profit.”

The MSA EU steers are fed a combination of pasture and crop as well as pellets through Advantage feeders. The pellets are supplied by Riverina in Oakey and include the Alltech nitrogen source Optisync to improve rumen efficiency. The steers are either turned off at about 400kg-plus as feeders or taken through to 640kg meatworks weights.

Susanne Roth, who heads Alltech E-CO2 in Australia, said it was no surprise that the most efficient animals had the lowest carbon footprint.

“It comes back to optimising feeding regimes and maximising the function of the rumen,” Dr Roth said.

“Animals in feedlots do emit more emissions compared to an animal in the paddock because their feed intakes are so much higher.

UK-based Carrie Bellas, who has been working with E-CO2 around the world, said the carbon measurements were being driven by consumers through the major retailers.

“Supermarkets want to be able to assure consumers that the beef they are eating is produced in a sustainable system,” Ms Bellas said.

“What we’re able to provide is a certified measure of the beef component of a farm. Producers can not only to benchmark their carbon footprint, but more importantly identify opportunities to improve the efficiencies of their cattle and ultimately make their farms more profitable.”

While a farm’s carbon footprint was underpinned by hard facts and number crunching, it was the conversations in the paddock that provide real insight, she said.

Dr Roth, who has a PhD in animal nutrition, said the bulk of the necessary detail could be extracted from a farm’s annual accounts.

“But where the understanding really comes in is out in the paddock,” Dr Roth said.

“Farm systems are complex and often unique to the manager.

“It’s understanding that complexity that, not only provides a clearer picture of the carbon footprint, but also enables a discovery process that begins to identify on-farm efficiencies.

“It is really exciting to see how determining a farm’s carbon footprint can drive the farm business.

“On one level it’s all about reducing the footprint to match consumer expectations. But a real driver is that more efficient farms are more profitable.”

The Australian red meat industry already has a stated goal of being carbon neutral by 2030.

Meat and Livestock Australia managing director Richard Norton said the achievement would put Australia well ahead of its competitors, giving consumers even more confidence in the quality and integrity of Australian red meat and turning environmental criticism of the industry on its head.