Ranking alongside Gallipoli and the Western Front, the Battle for Beersheba, a significant battle for Australian troops, is soon to be commemorated. The capture of Beersheba, as well as giving the Anzac horses much-needed water, turned the course of World War I's eastern front in the favour of the Allies.

World War I was fought on two fronts, the western one in France and Belgium, and the eastern one around the Mediterranean Sea against the Turks.

Australia’s Light Horse troops and their horses were originally sent to Egypt, and it was there that they were training when they were called to Gallipoli.

Following that campaign, they returned to Egypt and were stationed around the Cairo area in order to protect the vital sea route of the Suez Canal.

The Turks had attacked there earlier, in 1915, and came back again after the Gallipoli campaign was over.

This led to the battle of Romani in 1916, which was won by the Light Horse despite being outnumbered by many thousands. 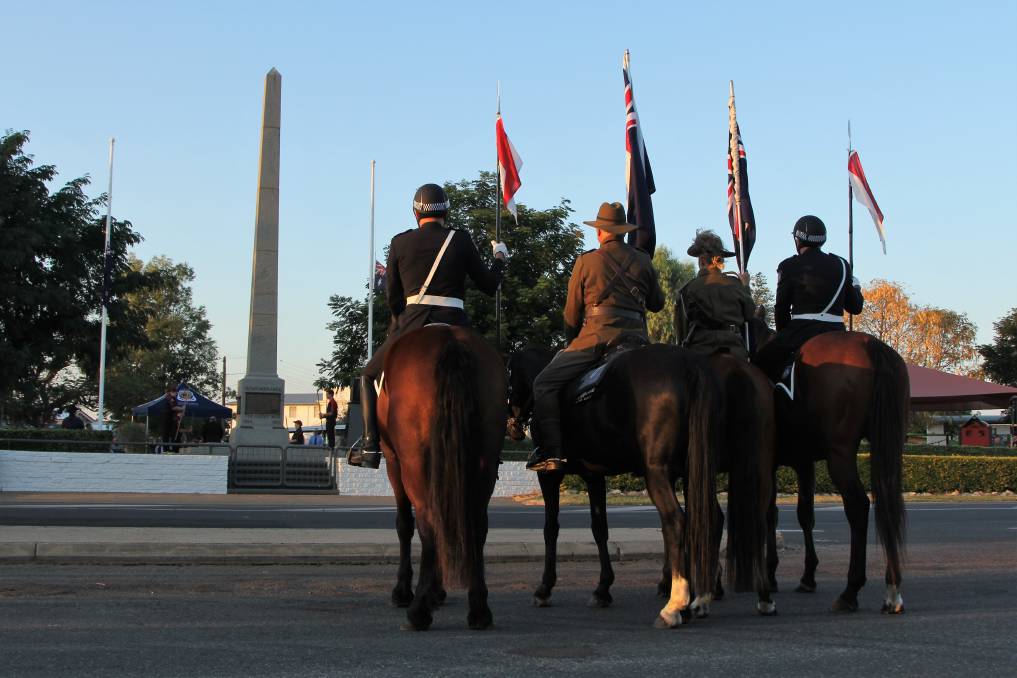 The colour party taking part in the western Queensland Beersheba re-enactment paying its respects at the Longreach cenotaph.

From here they pursued the Turks north through the desert. There were numerous engagements along the way, with the need for water being all-important.

The battle for Gaza was a disaster, described by some as a second Gallipoli, but after it, the English General Allenby became Commander in Chief of the Egypt Expeditionary Force and Australia’s Lieutenant General Harry Chauvel took control of the Desert Mounted Column.

From this, a new plan of attack was hatched. The line from Gaza across to Beersheba was all important, but instead of yet another attempt to take Gaza, it was decided to attack Beersheba.

After three nights trekking through the desert, the Light Horse troops joined British divisions in the attack on October 31, 1917, in an all-day battle.

With an hour of daylight left, General Chauvel gave the order for the Anzac 4th brigade to line up and charge.

Speed and surprise was their only chance – surprise because they came from an unexpected direction, and because the soldiers didn’t dismount to fight but instead charged on horseback.

The horses set off at a trot, then a canter, finally galloping across the six kilometre plain, as the Turks desperately tried to adjust their gun sights.

The charge succeeded in taking the city with only 31 Anzac soldiers dying.

While this was the turning point in the war, the Light Horse still had another year of bitter fighting ahead, all the time pushing north, through Jerusalem, until they reached Damascus in October 1918, where the Ottoman empire, which had ruled for 400 years, was overthrown.

As part of its Anzac centenary commemorations, the Australian government will conduct a national service on October 31, at the Beersheba War Cemetery and Park of the Australian Soldier in Be’er Sheba, Israel.

The New Zealand government will conduct a national service at Tel el Sava on the same day.