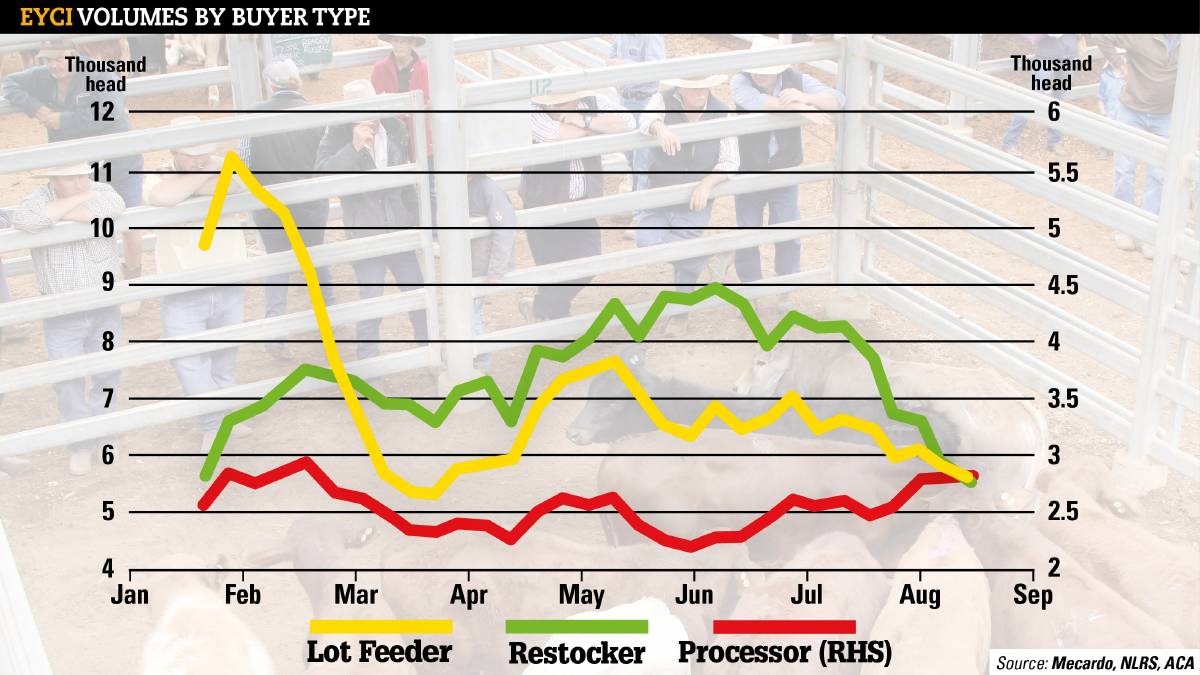 A look at how the buyer make-up at saleyards has shifted in 2017.

RESTOCKER bustle could well kick off again should the forecast of a more normal rainfall pattern through October come to fruition, although for lot feeders it may be a case of too little too late.

That was the conclusion of discussion at a cattle market webinar run by market analysts Mecardo last week, which took an interesting look at the constantly shifting form of the saleyard buyer make-up through 2017.

The uncharacteristic price decline in the Eastern Young Cattle Indicator (EYCI) during winter was the result of very dry conditions affecting the volumes being picked up by restockers, the group which has largely underpinned the skyrocketing prices of the 12 months prior, the 300 registered producers and industry representatives attending the webinar heard.

In Victoria, South Australia and Western Australia, rainfall has been the lowest on record in June and very much below average in July.

The Northern Territory was the anomaly, receiving very much above average rainfall through July.

Restockers are currently purchasing 5500 head a week, which is 24 per cent below the average for the season so far.

“That goes to show the dry winter really did have an impact on the momentum for restockers,” cattle market analyst Matt Dalgleish said.

“For EYCI-style cattle, what northern restockers are paying is sitting pretty much on average - it has stayed within the 70pc range of the ten-year average through 2017.

“For southern restockers, it is a different picture, one of much more volatility. In April and May, for example, they paid very much above the ten-year average.”

Mr Dalgleish believes restockers will re-engage with a normal spring - “maybe not in as big a way as we saw last spring but they will support the market and young cattle possibly will trade sideways as a result.”

The downward trajectory for lot feeders started earlier than restockers and has been slightly less severe.

They are travelling along at 5700 head a week, 18pc under the season average.

“Tighter margins meant they paid below the ten year average price for much of this year, coming back to average around July,” Mr Dalgleish said.

“Once again, there was a lot more volatility in the south than the north.”

Processors have bucked the trend, posting a steady increase since May-June, to now sit 10pc above the season average of 2500 head.

This year was very much below normal for what processors have paid, systematic of what is happening offshore.

“One thing of note is the increase in the price paid by processors from May,” Mr Dalgleish said.

“Processor margins have moved into positive territory for the first time this season, increasing the incentive to pay a bit more.”

The United States 90CL (chemical lean) price and the EYCI are now back in sync, after the EYCI began the season overvalued in relation to this indicative import price.

Mr Dalgleish explained that even though Japan is Australia’s biggest beef trade partner at the moment, the US is our second biggest and it is also our primary competitor in Japan, Korea and China.

“Because they both take our product and compete with us, the prices in existence in the US are very important to our cattle market and historically there is a strong correlation,” he said.

The story Changing faces on the rails first appeared on Farm Online.