Two farmers from Westbrook and Dalby are the latest casualties in the shift in attitude within weapons licencing circles to primary producers’ possession of category H firearms. 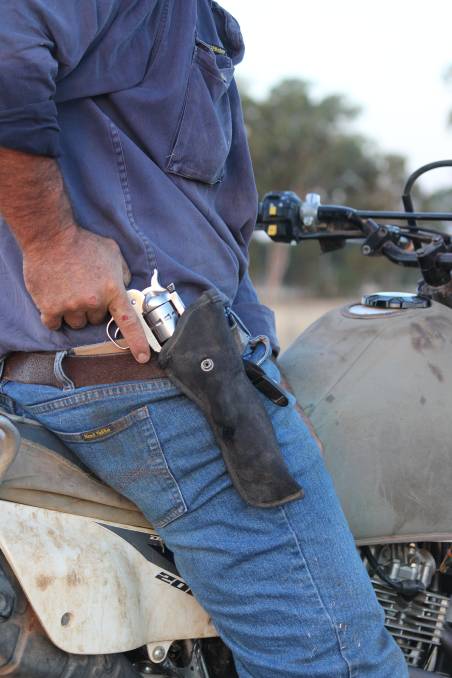 Police Minister Mark Ryan says he has been working with the Weapons Advisory Forum to ensure key stakeholders know the requirements for holding a category H licence under weapons regulations in Queensland.

Two farmers from Westbrook and Dalby are the latest casualties in the shift in attitude within weapons licencing circles to primary producers’ possession of category H firearms.

Opposition police spokesman, Tim Mander tabled letters from Weapons Licencing and Queensland Police that had been sent to 71-year-old Doug Browne and 65-year-old Gary Smythe during a recent estimates hearing in Brisbane, which he said showed further evidence of a change in policy by the Palaszczuk government.

After applying in March 2016 for a continuation of a pistol licence, held for many years according to Mr Mander, Mr Browne received a letter from Weapons Licencing in May rejecting his application, saying it was not satisfied he had shown genuine need for a concealable firearm.

“Your requirements can be adequately met in another way using a weapon of another category,” it said.

In May last year the then-Police Minister, Bill Byrne came under fire for calling primary producers “lone cowboys” when questioned why category H licence applications were consistently being denied.

Mr Mander said that, regardless of the government’s ongoing insistence that there had been no policy shift regarding handgun use by primary producers, Police Minister Mark Ryan’s responses at the estimates hearing showed otherwise.

In responding to Mr Mander’s question as to why the government continued to deny primary producers an essential tool of trade held legally for over 30 years, Mr Ryan said there had been no change to the weapons regulation with respect to category H.

Instead, he said there had been “some QCAT (Queensland Civil and Administrative Tribunal) decisions which provide some clarity around definitions in the Weapons Regulation”.

These were detailed by Queensland Country Life in May 2016 when it reported that the tribunal in 2014 upheld the Weapons Licensing Branch’s decision to refuse John James Shaxson a category H weapons licence, ruling he had other weapons – shotguns and rifles – that were adequate to euthanase trapped wild dogs.

Mr Ryan sought to demonstrate the Palaszczuk government’s leniency on the issue, telling the estimates hearing that while Queensland fundamentally followed the National Firearms agreement, it varied “in certain instances...and one particular instance is in category H weapons”.

“We allow primary producers on a case-by-case basis to hold category H weapons,” he said.

“Other states, like New South Wales, Victoria and Tasmania, do not issue this type of licence for primary producers.

“Other states which do issue that type of licence have fewer than 100 on offer.

Mr Mander said that was irrelevant.

“We don’t have daylight saving in Queensland either. We have laws for our own state.”

Mr Mander said Mr Ryan was the third Police Minister in the Palaszczuk government to deny any policy change, which was obviously not the case.

“I get two or three letters a week from people who have their licences rejected after years of being able to have one.

“What’s changed? We have no spate of stealing that they’re responding to.

“This is just taking away tools of trade and this attack on primary producers by Weapons Licencing is falling on deaf ears.

“It’s only happened in this term of government so it’s obviously a policy change.

“I can only assume Weapons Licencing feels they have a more sympathetic government.”

Mr Ryan said he supported the decision of Weapons Licencing to act independently of any political interference in respect of these matters.

“Weapons Licencing will continue to take guidance from the courts about how to interpret the particular regulation.

“If anyone is particularly aggrieved about a decision of the Weapons Licencing Branch, there are appropriate processes for them to follow to appeal those decisions.

“I emphasise once again that the regulation has not changed during this term of government in respect of category H weapons.”