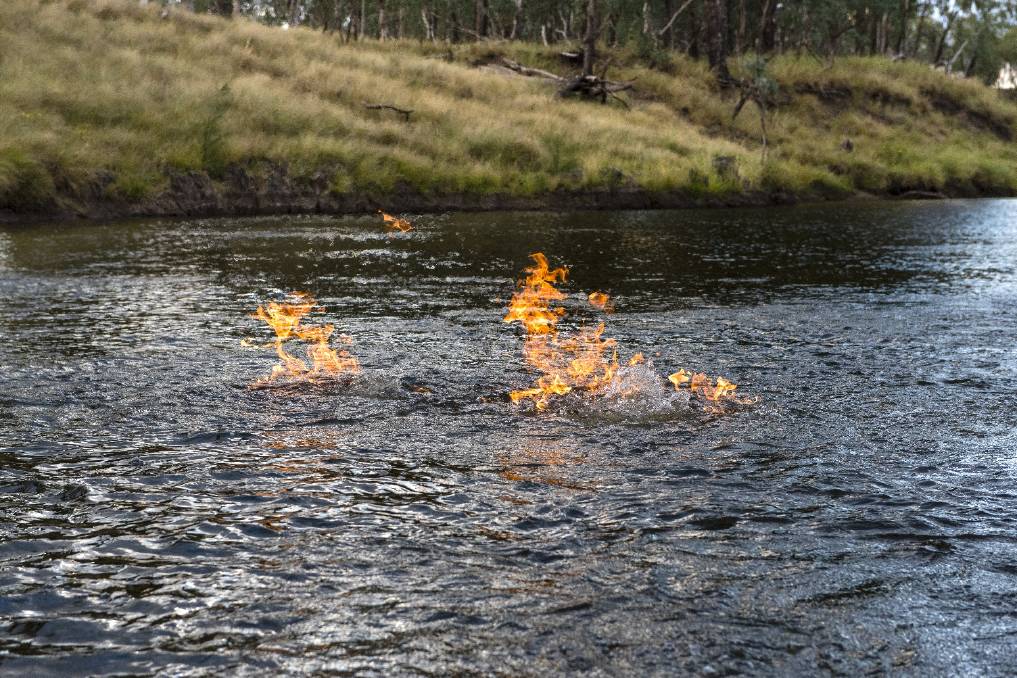 A new report has been released looking into CSG affects on the Condamine River.

THE affects of coal seam gas (CSG) extraction causing the Condamine River to bubble are far from over with new research finding that methane emissions from below ground could increase significantly.

The Condamine River made headlines last year when footage was released showing huge flames erupting from methane gas bubbling to the surface.

Greens MP Jeremy Buckingham was captured waving a kitchen lighter over the side of a tinny boat, starting a fire.

Now a report by the Melbourne Energy Institute has found that due to the thin and absent sealing layer of “aquitard” in the Surat Basin depressurisation from CSG mining could lead to widespread methane leakage.

Due to limited information, it is unknown how effective the aquitard is in preventing gas leaking to the atmosphere.

Continued depressurisation of the coal seams while users are extracting water from various aquifers could significantly increase the emissions.

The Australia Institute’s Matt Grudnoff said the research revealed previously unmeasured information that could be detrimental to the Paris Agreement.

He said it was appalling that the CSG industry had been allowed to go about work without proper assessment of the potential greenhouse gas emissions.

“In light of this report, the Queensland Government should be taking urgent action to prevent further CSG drilling until the serious risks identified in this report have been addressed,” he said.

The Australian Petroleum Production & Exploration Association (APPEA) Queensland Director Rhys Turner said they would work with researchers to help them better understand the nature of the seeps and the success of mitigation programs.

“The fact is that the industry has been monitoring the Condamine River seeps since they were first observed to have increased in 2012 and continues to work with independent researchers including the CSIRO to better understand the local geology and possible causes,” he said.

“Industry data and CSIRO measurements show that peak rates of late 2015 to early 2016 have reduced substantially and we recently saw the lowest measurement since recordings began in 2013, a reduction of over 60% in the last 6 months.”

“It doesn’t take a hydrogeologist or an expert to tell you that if you create a void by sucking out millions of gallons of water than something will take up the void,” she said.

“It won’t supply the answers. My simplest question to Origin is why is there no mention of the bubbling river phenomenon in the environmental impact statement? Surely someone would have noticed it.”

Limited data meant it was difficult to assess the full scale of the risk of the emissions during the research. ​