Bird flu outbreaks in parts of Asia, Europe, and now the US, are creating some optimistic sales prospects for Australian poultry product exports

Bird flu outbreaks in parts of Asia, Europe, and now the US, are creating some optimistic sales prospects for Australian exports in the competitive poultry products market.

In the past two months big egg producers Pace Farms and Sunny Queen have moved swiftly to cash in on massive demand in South Korea, where avian influenza has claimed more than 26 million hens since late last year.

Others are trying to get a toehold in the Korean market, too, as a normally expensive 30 per cent egg import tariff has temporarily fallen to zero.

South Korea’s egg shortage intensified last month after outbreaks of bird flu in four states in the US, prompting Seoul to ban all uncooked US poultry and egg products.

Taiwan also banned poultry-related imports from Tennessee, where the highly pathogenic H7 avian influenza was discovered on a poultry farm in early March, and halted poultry meat sales from Wisconsin after an H5 avian flu outbreak.

The disease has also been detected in Alabama and Kentucky.

Given the US is a major egg exporter and the world’s second biggest poultry meat trader its bird flu problems are potentially helpful news for Australia’s fledgling chicken meat and egg export sectors.

However, global markets are highly price sensitive and, as one industry spokesman noted, chicken meat opportunities have actually become more volatile in many parts of the world as more flu outbreaks emerged in recent years and jittery governments imposed fresh trade barriers. 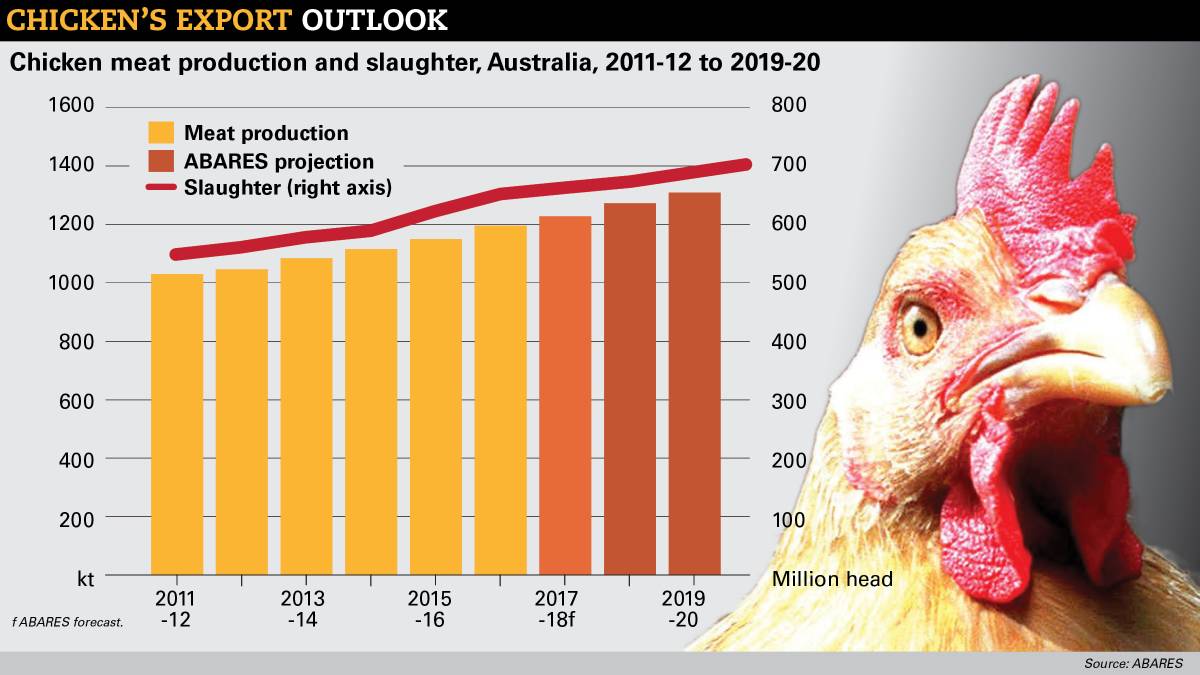 Some high-end fresh lines go to niche Asian markets and the United Arab Emirates, but the industry, led by big farmer-processors Inghams and Baiada, generally focuses on a domestic sales growing at 3pc annually.

Chicken’s share of Australia’s total meat consumption is set to reach 44pc within five years, compared to 25.4pc for beef.

Bird flu is tipped to cut EU exports by 100,000t in 2017, down to 11.7m tonnes, following import restrictions by South Africa, the Philippines and other key buyers.

Thailand, the world's fourth-ranked exporter, has jumped at opportunities to sell more chicken meat globally, with its sales climbing near 800,000t last year.

Assuming it stays disease-free while neighbours such as Vietnam and Malaysia battle avian flu, Thailand expects exports to rise 4pc in 2017, largely thanks to fresh access to South Korea.

However, companies such as Inghams may become more strategic about cashing in on Australia’s reputation as a clean food source if long-term markets could be pinned down.

“Asia has become a bit of a boiling point lately, but different outbreaks have happened everywhere from Austria to Africa, France, and Italy,” she said.

“The World Health Organisation seems more worried, given the number of alerts being routinely published.”

After losing a third of its poultry flock and access to US imports, Korea’s supply squeeze may lead to an extension of the temporary tariff holiday for Australian eggs past June.

The import tariff break had given his company a valued chance to establish its credentials in Korea.

“Maybe they’ll have a staged return to tariffs, which would help us further build relations with new customers.”

Meanwhile, the Australian Egg Corporation has launched a new Egg Standards of Australia (ESA) voluntary quality assurance program for farms to highlight the quality of production among egg producers complying with the new code.

“After extensive consultation with egg farmers and their customers, we’ve been able to deliver a clearer and more objective set of compliance standards that reflect current customer and regulatory requirements.”​