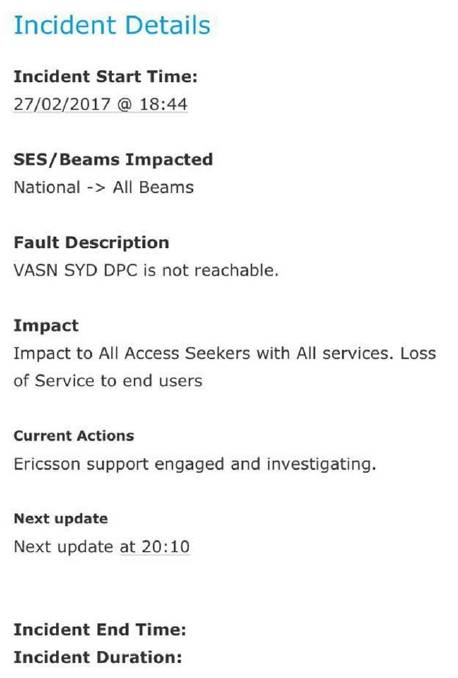 The Better Internet for Rural Regional and Remote Australia Facebook page was broadcasting the news late on Monday afternoon, sharing a notice from Activ8me Customer Care, which said all Sky Muster services were unable to connect to the internet.

“This outage will also affect VoIP services connected via Sky Muster,” it went on to say, noting that while nbn co was working to restore services as quickly as possible, “no ETA is currently known”.

This was followed up with an official notification from nbn co, issued at 6.44pm AEDT, saying the incident was national, affecting all beams.

BIRRR founder Kristy Sparrow said it was ironic that the only satellite internet users able to connect to the internet were people who hadn’t migrated across to Sky Muster, touted as a greatly superior service for rural and remote people.

Along with other tongue-in-cheek comments on the BIRRR page made by people still able to access the internet via mobile broadband, Kristy said she hoped the people in charge hadn’t turned off the wrong satellite.

SkyMesh CEO Paul Rees was quoted as saying, “We’re not sure if they mixed Sky Muster up with the Interim Satellite Service which is due to be turned off tomorrow night, but we have asked them to turn Sky Muster back on please”.

On a serious note, Kristy said the loss of internet services for thousands of rural people was exactly why landlines needed to be kept.

She was referring to the Productivity Commission recommendation to remove the mandate for every household to have a telephone landline, which would mean voice services would be delivered via satellite for users in rural and remote Australia.

“It’s not reliable technology,” she said.

She also urged those who were still able to access the internet to let friends and neighbours who would be without internet service, know what had happened.