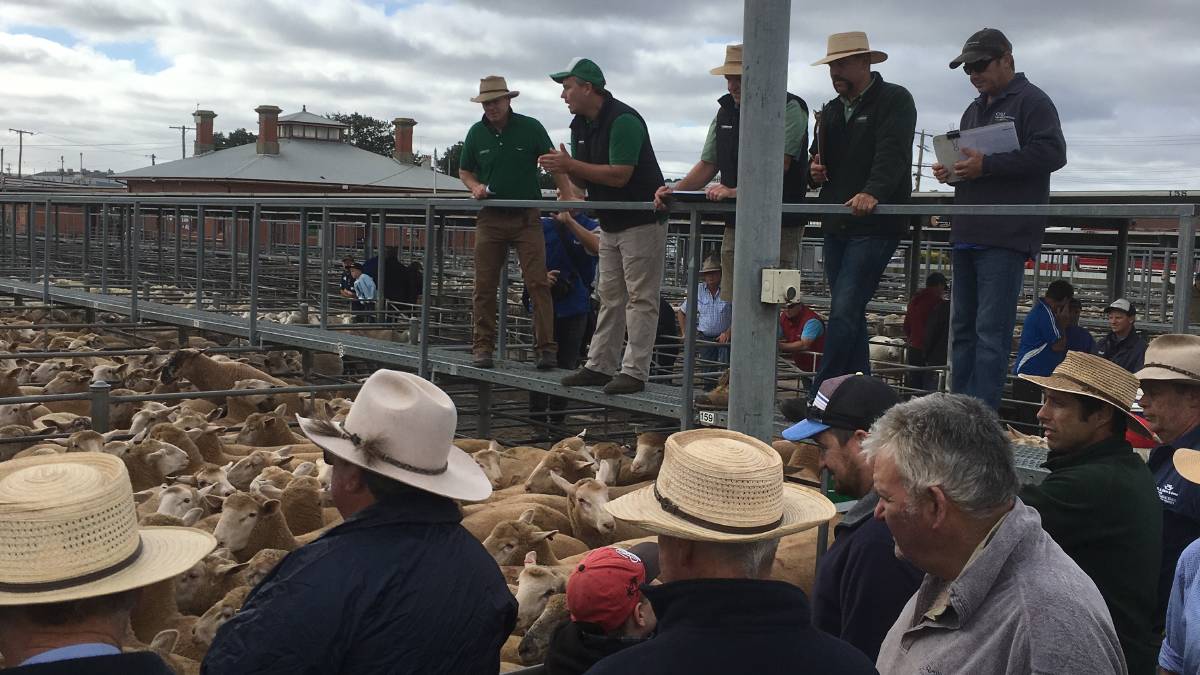 Retail resistance for the current high prices for sheep and lambs has been attributed to the widening gap between OTH and saleyard prices.

THE spread between over-the-hooks (OTH) and saleyard prices for mutton and lamb continues to widen as processors set limits well below the physical market.

THE spread between over-the-hooks (OTH) and saleyard prices for mutton and lamb continues to widen as processors set limits well below the physical market.

This is according to some livestock agents who say the forward contracts and over the hook prices were failing to entice volumes out of the saleyards.

While the National Trade Lamb Indicator hit 657c/kg this week, Mr Rutledge said OTH prices had been out of touch with the saleyard for six months with price differences of about 50c/kg for lambs and 100c/kg for mutton.

“There would be a lot of forward contract lambs being delivered currently between 510-550c/kg, which would be 100c/kg less than what they’re making physically in the saleyards,” he said.

“The contract lambs will run out at the end of March so there will be a big lag of lambs from March through to the winter which will sustain or increase current prices.”

The market will find its own level and it won’t be a splash in the saleyards or an outstanding hooks rate, it will be the customers that stakes its price position. - Paul Leonard, TFI

The caveat on the current market, Mr Rutledge said, was a price resistance at the consumer level with processors “badly wounded” by the current climate.

“Domestic processors are struggling with lamb procurement and selling,” he said.

Since the middle of 2016 the saleyard to OTH premium had trended well above the normal range, Mecardo senior market analyst Matt Dalgleish said.

“It seems peculiar that the spread between the two prices could remain this wide for such an extended period of time without the behaviour of the buyers and sellers altering to bring the spread back towards a more normal level,” Mr Dalgleish said.

However, some market commentators suggest the saleyard price, when converted to c/kg carcase weight (cwt), was inflated due to the inaccuracy of the stock weights.

The price discrepancies have intensified debate over whether all sheep sold in saleyards should be weighed prior to sale.

Forbes Livestock & Agency Co, Tim Mackay said while buyers would usually have two to three weeks of lambs under contract, they were currently struggling to fill quotas week-to-week.

“As soon as they’re short they’re forced back into the market to fill their quotas, which have forced them to pay more in the market than what they have been over the hooks,” Mr Mackay said.

“The OTH price isn’t attracting the amount of lambs that it normal would.”

A large domestic processor’s OTH price last week reflected this supply shortage with a 30c/kg difference between equivalent lambs in Coolac, Victoria and Gunnedah, NSW, at 680c/kg and 650c/kg respectively.

In the past six months, saleyard prices appear to trade higher than OTH prices with premiums for mutton tending to average twice that of trade lamb.

“Clients are comparing saleyard to hook prices and preferring to go to the saleyards because by the time they pay freight to abattoirs, they’re receiving better prices at their regional saleyards,” he said.

“I’m sure this gap will correct itself at some point when supply catches back up to demand.

“Some of the processors are really feeling the pressure of these prices.”

“Be it 700c/kg or 400c/kg, the market will find its own levels and it won’t be a splash in the saleyards or an outstanding hooks rate, it will be the customers that stakes its price position,” Mr Leonard said.

“At the end of the day, the rate is inevitably set by the consumers, which validate the returns processors can pay either in saleyards or OTH.

“There is no doubt prices in the last six weeks prices have been driven by demand and supply but that doesn’t necessarily reflect the true value of lamb which is, what consumers are willing to pay.”

While Mr Leonard said some markets had outperformed OTH grid prices recently, this was not reflective of the long-term market direction.

“Saleyards’ returns is a perceived price because it is subjective. With OTH pricing, stock are accurately weighed, skins are tendered and vendors are paid for what they produce – there is no guesswork,” he said.