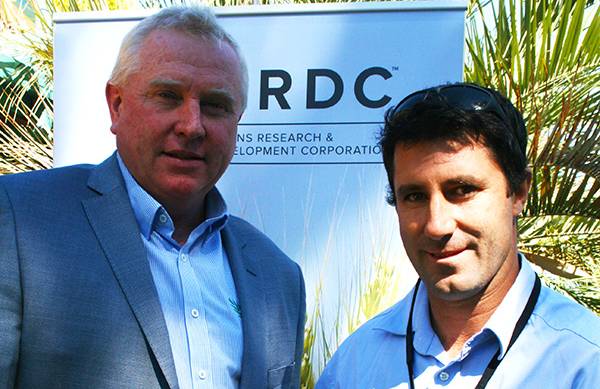 Griffith-based agronomist Barry Haskins has been awarded the GRDC's 2017 Seed of Light Award.

LEADING NSW agronomist Barry Haskins has been recognised for his invaluable contribution to northern grains research, being awarded the 2017 Seed of Light Award by the Grains Research and Development Corporation (GRDC).

The award was presented today at the GRDC Grains Research Update at Wagga Wagga and recognises an individual who has made a significant contribution to communicating the importance and relevance of research outcomes to the wider grains industry.

GRDC northern panel chair John Minogue said Mr Haskins was a worthy award recipient having dedicated enormous time and effort over the years to communicate key research findings to both the grains industry and wider community.

“Barry is extremely passionate about agriculture and agricultural extension and that passion has seen him delivering knowledge and skills both within and outside his grower network,” Mr Minogue said.

“He has an extensive following across an area that traditionally hasn’t been widely serviced by extension providers and over the years, he has successfully filled that knowledge gap.

“Barry’s helped many growers reach the top of their game where they are producing a maximum amount of grain from a minimum amount of moisture.”

Mr Haskins is a well-known and widely respected figure in the NSW grains industry having worked as a district agronomist with NSW Department of Primary Industries for 10 years before establishing AgGrow Agronomy and Research – an independent agricultural consulting and research company based at Griffith.

With a renowned ability to work with a diverse range of people and farm businesses, Mr Haskins has built an extensive list of clients and over the years and helped raise their individual and collective production benchmarks.

He has vast experience in cropping agronomy in both irrigated and dryland agriculture and offers research-based recommendations to clients covering an area of over 200,000 hectares across the Riverina region.

He’s a passionate advocate for the role research can play in improving production efficiency and farm profitability and has been a leading figure in the move towards conservation farming practices in southern NSW over the past 15 years.

In 2008 his efforts earned him a national award by the Australian Society of Agronomy when he was named young agronomist of the year.

GRDC Grains Research Updates will continue to be held during February and March with events scheduled for Corowa on February 16, Gulargambone on February 27, Dubbo on February 28 and March 1, Goondiwindi on March 7 and 8, Condamine on March 9, Bellata on March 10 and Coolamon on March 16.