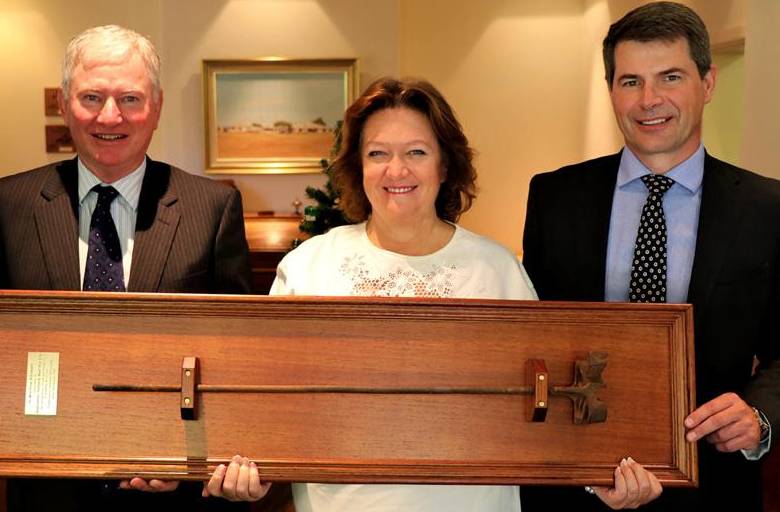 The mining magnate turned beef cattle queen, has also thrown her support behind a high-tech fertiliser mining and processing project in the UK.

Two months ago, while Mrs Rinehart’s Hancock Prospecting joint venture Australian Outback Beef (AOB) was making headlines in a bidding tussle for the Kidman business, she was also pumping almost $400m into a $5 billion phosphate mine being built 1500 metres under the North Yorkshire moors.

The mine, due to start production next year, is no ordinary phosphate extraction operation.

Not far from the historic port town of Whitby, it sits on the world’s largest known reserves of the high grade potash, polyhalite, a valuable mix of potassium, calcium, magnesium and sulphur.

The mine and a processing site will be linked by a 37 kilometre underground conveyor system taking mined rock direct to the coast where it will be crushed, prilled and sent via another enclosed conveyor to the port.

Hancock Prospecting has acquired about $70m worth of shares in the London Stock Exchange-listed company developing the venture, Sirius Minerals.

Sirius is led by several Australian executives with mining and finance backgrounds.

Hancock has also bought the rights to five per cent of the royalties from the first 13 million tonnes produced from the Sirius mine and then 1pc of its royalties for the next 70 years.

“This project delivers a new and natural product which is relevant to Hancock’s focus on agriculture,” Mrs Rinehart said.

“It has potential to become one of the world’s leading producers of multi-nutrient fertiliser and could have a life of 100 years.

“This fits with my approach to investing in strategic areas for the long-term and I hope the product will be of assistance to other Australian farmers, too.”

Polyhalite, to be sold under the trademark Poly4, is promoted as improving key mineral absorption efficiency of plants, resulting in heavier seed set and yields.

Poly4 has been the focus of years of agronomy trials in the UK and Africa on a range of crops from corn and soybeans to canola and high value vegetables.

Sirius managing director and Australian expatriate, Chris Fraser, said given Mrs Rinehart’s expertise in both mining and agriculture, her investment in the company’s patented fertiliser product and production plans was a significant vote of confidence.

Sirius expects to ramp up production from an initial 10m tonnes a year in 2018 to 13m tonnes (subject to development approvals) and eventually 20m tonnes by 2024.

The company has other buyers lined up in Europe, Central America, Africa, and China, which is set to take about a third of its projected output.

Hancock chief executive officer, Garry Korte, said the strong investment fundamentals behind the project, including the need to feed the world’s growing population and help boost farmland efficiency, had prompted his company to invest in the innovative Poly4 product.

Accepting an S. Kidman and Co branding iron from managing director, Greg Campbell, to mark her visit, Mrs Rinehart noted a century ago Sir Sidney Kidman and her grandfather, James Nicholas, had run business interests together. “My mother thought very, very highly of her father, and I can't help but feel she would be very happy our company has taken this historic step,” Mrs Rinehart said.

“We will build on this historic legacy as we plan to increase productivity and further invest to grow the iconic brand.”

AOB has acquired two thirds, or about 77,000 square kilometres of the Kidman company’s outback beef estate which went on the market in April 2015 sparking public debate and friction over the sale decision within the Kidman family.

Hancock Beef’s own cattle property assets, which already included holdings in Western Australia and central NSW, further expanded in 2016 with the purchase of Northern Territory properties “Riveren” and “Inverway” from short-lived Indonesian investors, and “Phoenix Park”.

Meanwhile, Mrs Rinehart has forecast her interest in WA-based, Bannister Downs Dairy, would result in a new processing centre by 2018.