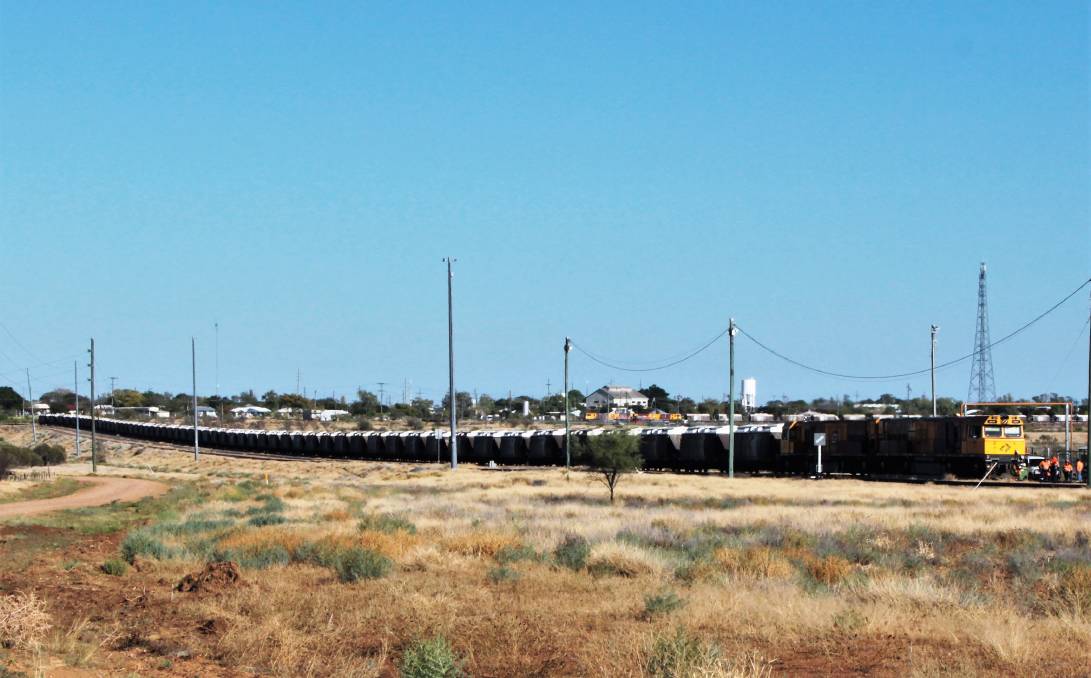 Changing fortunes: An Aurizon train on the outskirts of Hughenden. The loss of the Glencore haulage contract will mean a loss of 25 of the community's top-paying jobs, equal to $3m annually. Picture: Sally Cripps.

Extra water allocations and fresh money for the Hann Highway project are being lobbied for in the wake of news that rail company Aurizon will shed dozens of jobs in the north west from February next year, 25 of them in Hughenden.

Extra water allocations and fresh money for the Hann Highway project are being lobbied for in the wake of news that rail company Aurizon will shed dozens of jobs in the north west from February next year, 25 of them in Hughenden.

One outcome of Aurizon losing a key contract to haul mine inputs and outputs for Glencoe’s mines in Mount Isa will be two-thirds of the driver positions in Hughenden gone.

Flinders mayor Jane McNamara said it was a dark day for the town.

“As a percentage of our population, this announcement from Aurizon equates to the loss of 1000 jobs in Townsville or 10,000 in Brisbane,” she said.

“Nobody expects that sort of news. Just last week one of the young drivers was in the pub celebrating the purchase of a house in town.”

Cr McNamara said there had been a steady decline in the support of railway companies for the smaller towns along the Townsville to Mount Isa railway corridor since Labor’s privatisation of Queensland Rail and the introduction of “relay running”, a carriage behind the locomotive set up for drivers to sleep and take it in turns to drive.

The cuts are expected to impact further on Aurizon staff numbers in the town as complementary service activities are reduced along the rail corridor, which would flow on to the businesses and services in Hughenden.

Cr McNamara spent Tuesday afternoon in consultation with a number of state ministerial offices and Mount Isa MP Rob Katter, saying council would be working with all agencies to assist with employment packages for the shire and region.

“I’m asking the Palaszczuk government to seriously consider increased water allocations from the Flinders River for irrigated agriculture – and an urgent funding injection for local roads,” she said.

“There’s also immediate work that can be undertaken in regional control of prickly acacia for the productivity of grazing country.”

Cr McNamara said the shire would continue to work tirelessly with NorthBEEF on meat processing plant plans, but a lot of local people may have to sell up and go before that became operational.

“People are clearly devastated here, and all council can do is work on other projects. It gives us a real fire in the belly now.”

She said council’s first priority was to the people who had lost their jobs.

“This is not the first time we’ve gone through this in Hughenden – 30 jobs were lost three years ago – and it takes time to adjust to.”

About 50 jobs were lost from depots in Townsville, Charters Towers, Hughenden, Cloncurry and Mount Isa in 2014. That meant the loss of a maintenance depot, drivers and the Ecofab business.

Hughenden was once sustained by shearers, the council and the railway but drought and wild dogs have virtually ended the wool industry in the region, and now the rail industry is suffering the same fate, according to Cr McNamara.

“The railway used to be the biggest employer but that’s been whittled away since privatisation,” she said.

“That’s why other things are going to be so important now, to focus on diversification.

"Other projects that will assist with employment into the future will be the development of the renewable energy projects of Kennedy Energy Park and Overland Sun Farming.

“Other projects are in their infancy and will now need to be revisited and considered.”

“The timing of this announcement could not have come at a worst time of the year with families planning for the Christmas break and now many of them are facing a future of uncertainty in respect to their employment,” Mr Moffitt said.

“While the RTBU appreciates the company has lost business across the corridor resulting in 14 less train services a week operating between Townsville and Mount Isa, we firmly believe that the company is over reacting to the challenge in terms of the amount of jobs they are intending to shed”.

David Glasson, president of economic development group MITEZ said he is disappointment Glencore were moving their freight to the road network.

“If the issue is that if rail is no longer competitive with road transport then it is time for to examine the mix of charges including the below-rail access charges factored into these rail contracts,” Mr Glasson said.

“What’s the good of pressing the Queensland government into further upgrades to the line if customers are putting more and more product on the road.”