A warmer and wetter than average winter preceding a kind spring has delivered bumper wheat crops across the Maranoa. 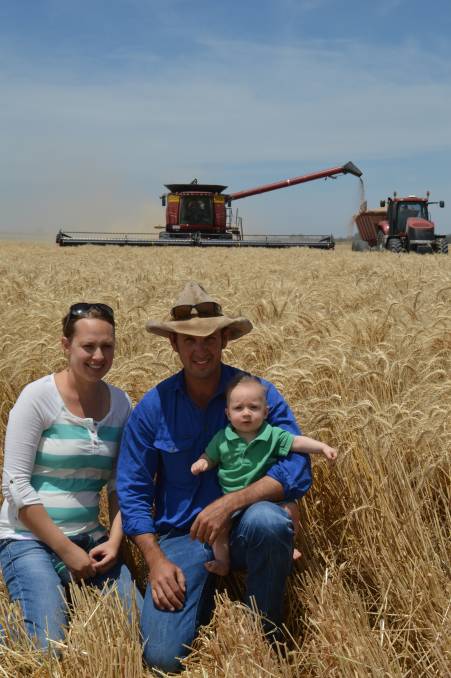 Bright days: Margie and Andrew Milla and their son Cooper, Austin Downs, Surat, were hoping clear skies would hold on until their wheat harvest wrapped up.

The wheat harvest in the Maranoa region is in full swing with yields delighting farmers after an exceptional spring growing season.

Mr Milla said all wheat was dry planted and received ideal rainfall soon after meaning 70 per cent of his water allocation remained in storage for his summer cropping rotation.

“We were very fortunate to have such a soft spring without any of those 40 degree days in September that we sometime see and it’s showing in the yields now,” he said.

“Our dryland cropping country is averaging 4.4t/ha and the irrigated wheat is averaging 7t/ha and both are way above our expectations.”

Mr Milla said 560kg of Urea was applied to both dryland and irrigation paddocks with priority given to irrigated country that was double cropped from cotton straight into wheat.

Mr Milla said quality was mainly good with only a “scattering of black point” in the dryland wheat.

“Everyone around here seems to have a touch of it- the irrigated wheat is fine because it was planted a little later and the heads weren’t fully formed when we had the bulk of the wet weather in winter,” he said.

“We haven’t had too much of it and apart from what was affected most of the dryland wheat is grading H2 and we even had some of the irrigated wheat grade APH2 so that was another nice surprise.”

Mr Milla said the farming potential of Austin Downs lay mostly hidden beneath a Paulownia tree plantation until the property was bought and development began three years ago.

“There were 1400 hectares of trees here originally and we’re developing the last 300 hectares now- we just finished stick raking and we’re ready to start leveling it for dryland farming,” he said.

“Only the irrigated area was developed when we came here and we developed one more circle for five in total.

“The plan is to have the whole place in crop next year so we should have about 1000 hectares of dryland cropping here- that’s the plan for next year’s winter.”

With the next crop in the forefront of his mind, Mr Milla said four pivots would go straight back to mungbeans after harvest and for something slightly left of centre, a 70 hectare seed crop of pigeon peas would also be planted.

“The pigeon peas are a refuge crop for cotton farmers and there’s a seed shortage at the moment so Associated Grains asked that I grow a crop,” he said.

“They needed an isolated grower two to three kilometres from another pigeon pea crop, presumably to avoid cross-pollination, and we’re pretty unique here in that there aren’t a lot of irrigators around.

“We harvested one half of the wheat and when we got to the other end I started the water because we want to get the pigeon peas in as soon as we can so I’m pre-watering to get a flush of weeds, then I’ll spray and plant.”

Despite wheat prices remaining at the lower end of the scale, Mr Milla remained a picture of positivity.

“It would have been nice to see the price come up but we’re getting unbelievable yields and it’s helping to offset that lower price- that’s farming and that’s markets.”