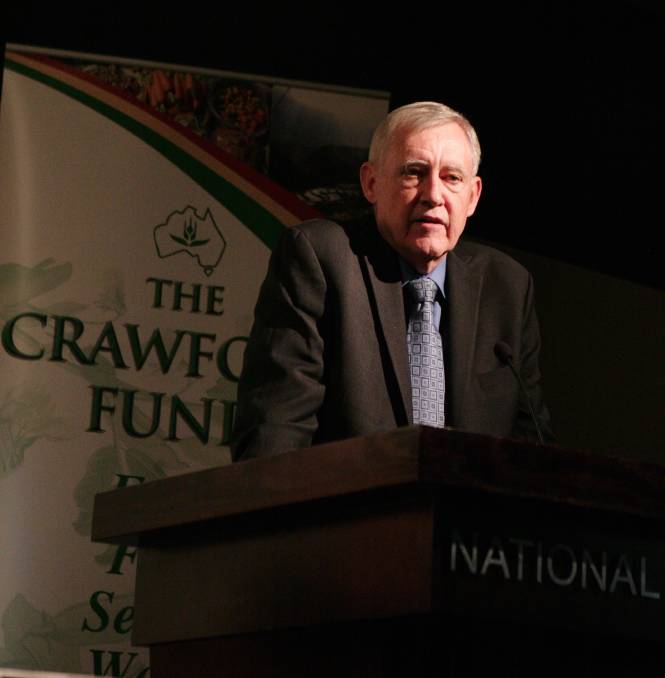 WORLD Food Prize winner Dr Howarth “Howdy” Bouis is on a mission to curtail global hunger and poverty by increasing the nutritional dexterity and health potential of staple food crops like corn, wheat and rice, through biofortification.

Dr Bouis is founder and director of the Washington DC based HarvestPlus which has been pushing biofortified crop development in regions like Africa, Asia and South America for 25-years.

The process utilises plant breeding techniques that deliberately increase micronutrient levels in food crops to enhance the content of vitamins and minerals like zinc and iron to improve the health output, of basic human diets in poverty stricken countries.

Biofortification involves conventional plant breeding techniques but Genetic Modification (GM) is another option that can help stimulate humanitarian or public health outcomes but Dr Bouis said that option is being restrained by “ridiculous” regulations, in different countries.

HarvestPlus estimates an estimated 20 million people are growing and eating biofortified crop varieties in eight different countries in 2016 and has a goal to reach 100 million by 2020 and one billion by 2030.

Dr Bouis said 32 countries had been identified as target growth areas and if biofortified crops capture 20 to 25 per cent of the staple food-supplies in those locations, by 2030, “we will have reached one billion people.

He said there was talk of biofortified crop varieties potentially being released in 55 countries, in a couple of years, through the added use of transgenic or GM crops like Golden Rice, which increases vitamin A content.

But political intervention is restricting investment and creating absurd regulations around those crop varieties, he said.

“Because of the politics, they put up all of these ridiculous regulations that you can’t get past and so you don’t release (new varieties),” he said.

“It’s a shame and that’s why we don’t invest more of our funds in developing transgenic crops.”

But Dr Bouis praised a recent move by more than 100 Nobel Laureates to sign a letter urging global governments to look beyond the fear-based political posturing of groups like Greenpeace that campaign against GMs despite scientifically proven health and agronomic benefits of products like Golden Rice.

The letter asked global leaders to acknowledge “authoritative” scientific evidence on the efficacy of plant biotechnology and re-examine the proven experiences of consumers and farmers over time.

“Greenpeace has spearheaded opposition to Golden Rice, which has the potential to reduce or eliminate much of the death and disease caused by a vitamin A deficiency which has the greatest impact on the poorest people in Africa and Southeast Asia,” the letter said.

Dr Bouis said Golden Rice wasn’t being used under the HarvestPlus program but it was well-advanced in terms of improving the potential for vitamin A uptake in poor countries.

He said the Nobel Prize winners’ initiative was “exactly the kind of proactive leadership that people need” to communicate effectively with the general public and explain why biotech crops are not dangerous and have “tremendous potential to do good”.

He spoke during an event at the National Press Club in Canberra, co-hosted by the Crawford Fund, the Australian Centre for International Agricultural Research and the newly re-formed National Rural Press Club.

Under his leadership, crops like iron and zinc fortified beans, rice, wheat and pearl millet and Vitamin A-enriched cassava, maize and orange sweet potato are being tested or have already been released in over 40 countries.

He said it had been proven that vitamin pills proven can reduce child mortality rates by about 23 per cent and cost 2-3 cents each to manufacture - but a distributing organisation was needed, which increased the final cost to $1 per capsule.

Dr Bouis said 500 million pills were given out each year which was a very cost effective investment but the problem with that program was its recurring costs.

He said 500 million pills per year could be distributed over a decade for a total spend of $5 billion but at the end of that period “you’re still starting over again”.

Dr Bouis said the “beauty” of biofortification and agricultural research was being able to invest at a central location, to develop a new product like orange maize; a biofortified crop rich in vitamin A and used in African countries.

He said biofortified plant varieties can then be made available to other countries that can test locally and implement it in their food systems “and your recurring costs disappear”.

“Because farmers are growing maize – they grow white maize and they grow orange maize and it’s the same cost – you don’t spend anywhere near $5b in developing it and getting it out and you have a sustainable solution,” he said.

“I’m not saying biofortification makes vitamin capsules obsolete but it’s much more cost effective, it’s another tool and in some cases you will be able to reduce your vitamin A capsule programs and you’ll be able to save a lot of money.

“That’s why we’re doing biofortification; because it’s so cost effective.”

He said after being released in African countries the job of HavestPlus now was to “scale up acceptance of orange maize”.

“I have a vision in 25 years from now that a little girl will ask her grandmother, ‘did they have white maize? I’ve never heard of white maize’ and the grandmother will say, ‘yes it used to be white’,” he said.

“Carrots used to be white and now we’ve forgotten that and I hope the same thing happens with maize.”

Dr Bouis said for biofortification to be successful, any new plant varieties had to be high yielding and contain greater mineral density, to improve human nutrition and reverse problems like vitamin A deficiency.

He said through evidenced based results of human health and agronomic improvements, delivery must be scaled-up and main-stream acceptance also needed, including by seed companies and distributors, to ensure sustainability.

Biofortified crops have already been released in 30 countries and multi-location testing is occurring on new varieties in 25 other countries, he said.

“In terms of delivery we’re very broad but we’re not very deep – our whole effort now is to deepen the uptake of these crops,” he said.

“We’ve developed the breeding pipelines and have second and third waves coming out.”

He said 450,000 deaths per year were also attributed to zinc deficiency and a lack of zinc also compromised child immune systems.

Poor people eat many food staples to prevent them from going hungry but they can’t afford to buy vegetables, fruits, lentils and animal and fish products to provide mineral and vitamin content, in their normal diets, he said.

But Dr Bouis said in countries like Bangladesh, a high-zinc rice variety was released in 2013 with improved health benefits and higher yield potential for local farmers, which is now driving its adoption.

“Over time we hope we can capture a very high percentage of the total rice supply in Bangladesh,” he said.

“Every time you buy a rice and every time you eat a rice, once you’ve reached this kind of saturation, everything will be higher in zinc.”