Primary producers around Queensland are outraged at being depicted as “lone cowboys” striding through the landscape with pistols strapped to their hips, responding angrily to comments by Police Minister Bill Byrne that he did not accept the idea that a pistol was a legitimate agricultural tool, putting users in a poor light in doing so. Primary producers around Queensland are outraged at being depicted as “lone cowboys” striding through the landscape with pistols strapped to their hips, responding angrily to comments by Police Minister Bill Byrne that he did not accept the idea that a pistol was a legitimate agricultural tool, putting users in a poor light in doing so.

“He is clearly out of touch with the animal welfare challenges faced by producers every day,” Phillip Crocker said on Facebook. “To use derogatory comments to describe farmers who are just trying to do their job is way below the belt.”

Ben Marion has been a firearms instructor on the Central Highlands for seven years and said he believed people on the land were the most vigilant group of pistol owners in the community.

“They understand what guns can do and handle them more safely,” he said. “They have them to use as a last resort, when they’ve tried every other option in a situation.”

Mr Byrne’s comments are fuelling concerns that moves are afoot to ensure that category H weapons – concealable firearms – can no longer be part of a primary production arsenal.

He was responding in Parliament to a question from the Member for Mount Isa, Rob Katter, who asked why licences for category H weapons were being denied.

Weapons Licensing Branch Sergeant Steve Steenstrup has since confirmed that, based on a judgement in the Queensland Civil and Administrative Tribunal in June 2014, primary producers would find it hard to obtain a licence for the humane destruction of animals.

The tribunal upheld the Weapons Licensing Branch’s decision to refuse John James Shaxson a category H weapons licence, ruling he had other weapons – shotguns and rifles – that were adequate to euthanase trapped wild dogs.

“You have to prove that you have a need and that it can’t be met by any other weapon,” Sergeant Steenstrup said.

It’s a decision that has caught Roma beef producer Jack Groat by surprise. 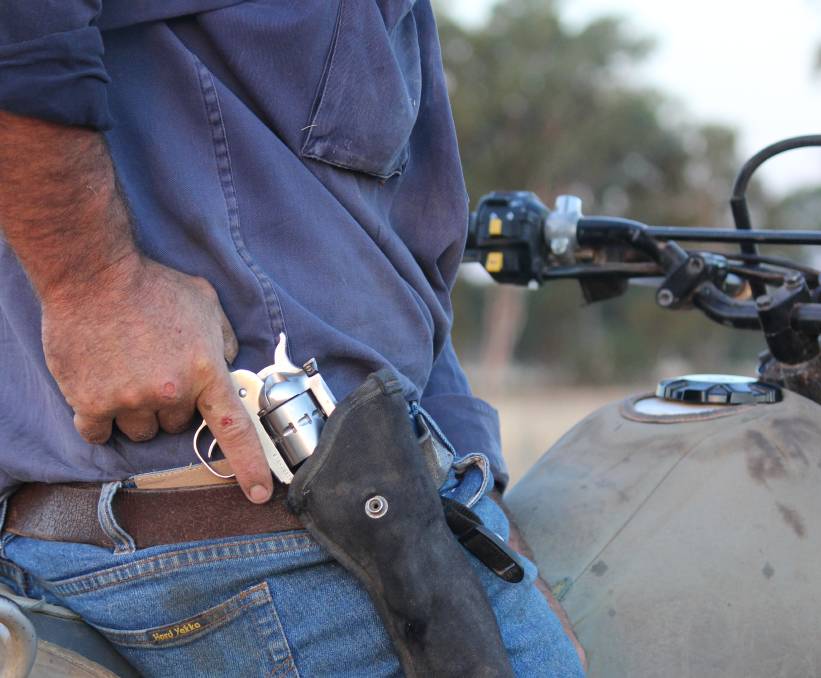 He recently moved to a new property and only found out about changes to category H licencing when he called the Weapons Licensing Branch to have his address changed.

“They told me I’d have to apply and that I was welcome to but that there was no way I’d be getting another category H licence,” he said.

“I carry mine around with me on the motorbike all the time. It means I always have a gun if I see a mob of pigs or a wild dog or even an injured animal. You don’t use them every day but they are most definitely a tool that you use when the need arises.”

Like many producers who have contacted Queensland Country Life in recent weeks, Mr Groat is angry at the “underhand” way that Weapons Licensing has handled the change in direction.

“I was completely unaware that this change had occurred and all my friends that use handguns were too,” he said. “I spoke to a gun shop owner and they didn’t know anything about it either.”

AgForce weapons spokesman Graham Park is also angry about the change, and Minister Byrne’s apparent tacit approval, saying there was no legitimate reason for primary producers to be denied licences to own and carry concealable weapons.

“There appears to be an agenda within Weapons Licensing to prohibit all occupational uses of category H firearms,” he said.

“They are saying the model code under the national guidelines for the humane destruction of animals doesn’t support the use of category H firearms – that’s the rationale for the blanket denial at the moment.”

Mr Park said the code had been written in New South Wales in 1995 and primary producers had not been in mind when it was being drafted.

“It doesn’t prohibit the use of handguns; it just doesn’t talk about them.

“AgForce’s position is that it is drawing a very long bow to say this is a reason to deny licences to people.”

He added that the code had been in place for 20 years and primary producers had operated within it during that time. He questioned why words in the national guidelines had only been an issue for the last 18 months.

He also said that the Queensland Civil and Administrative Tribunal wasn’t a court and didn’t set legal precedent, meaning that each case could be decided on its merits.

This is markedly different from Sergeant Steenstrup’s view, who said the tribunal ruling had provided a benchmark for Weapons Licensing Branch decisions.

“Our officers ask what the law says. The QCAT said this, so we follow. If there’s been any change (to the granting of licences) it’s because of court decisions,” he said.

On the flip side, Mr Park said the Queensland Weapons Act made provision for primary producers and licenced pest controllers to use category H weapons in the course of their duties, and this had remained unchanged for a number of years.

National Wild Dog facilitator Greg Mifsud said his interpretation of the standard operating procedures in the national guidelines for the humane control of wild dogs was that the calibre of the weapon used was the most important consideration, not what weapon it was delivered with.

“It shouldn’t matter whether a rifle or a handgun is used, providing it’s of sufficient calibre to cause instant death,” he said.

“If the operating procedures refer to a rifle, it’s only because in most parts of the country they’re more accessible, but different states have different terrain.

“And the procedures are only guidelines, not hard and fast rules. They’re not any reason for a licence to be refused.”

Mr Parks said these were all issues that need to be addressed through a weapons forum.

All that Mr Byrne has said is that this will be established by the end of June.

In the meantime Mr Park said AgForce would be supporting all members who feel they’ve been treated unfairly, on an individual basis, and he urged anyone in this category to contact AgForce.