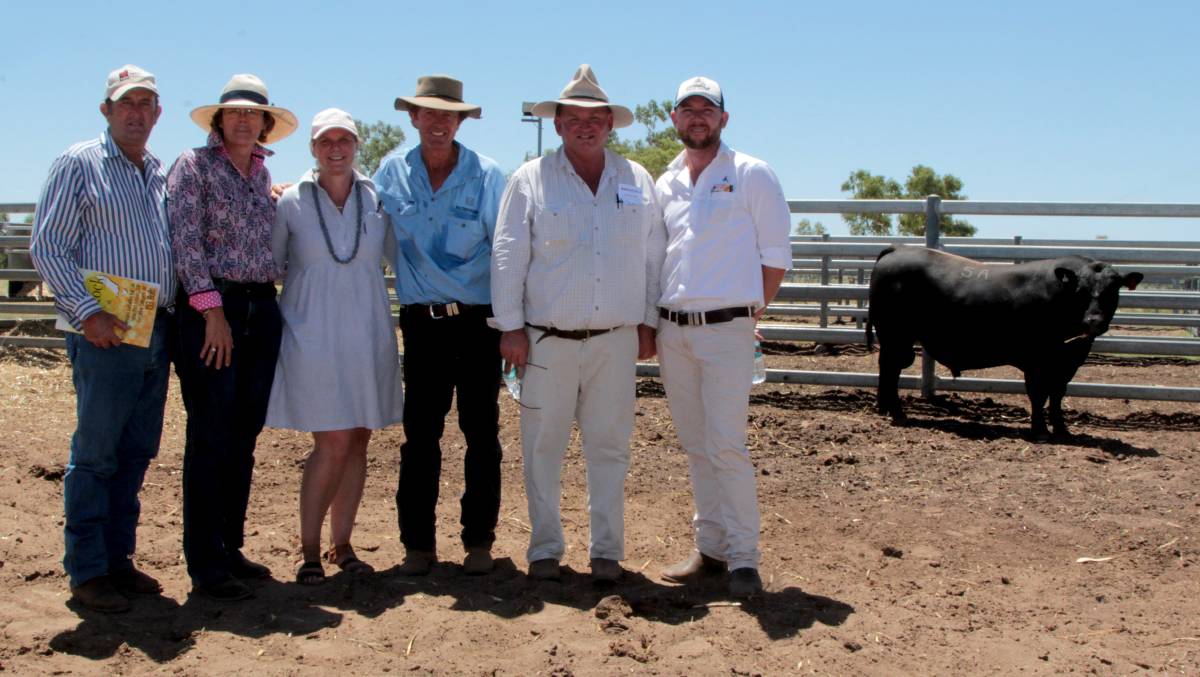 Black Angus bulls were snapped up by buyers at the seventh Australian Topstock bull sale at Barcaldine.

Black Angus bulls were snapped up by buyers at the seventh Australian Topstock bull sale at Barcaldine last Friday but the interest wasn’t as keen for the Red Angus and Senegus bulls on offer.

Of the five southern studs offering 110 bulls, Pathfinder Angus had the most success, clearing 95.5 per cent of their roster and selling the sale’s top priced bull, Pathfinder Docklands K670 for $11,000.

He was bought by Andrew and Cathie Fernie of Riverview, Clermont for their Brahman cow herd with the aim of increasing the herd’s fertility and weight.

It was the Fernie’s first time at the sale and they ended up with five bulls in total, including the top priced bull from The Glen Angus’ offering, The Glen Gascoyne, a silver grey bull in the top 10 per cent of Angus Breedplan statistics for eye muscle area and the top 1 per cent for retail beef yield. 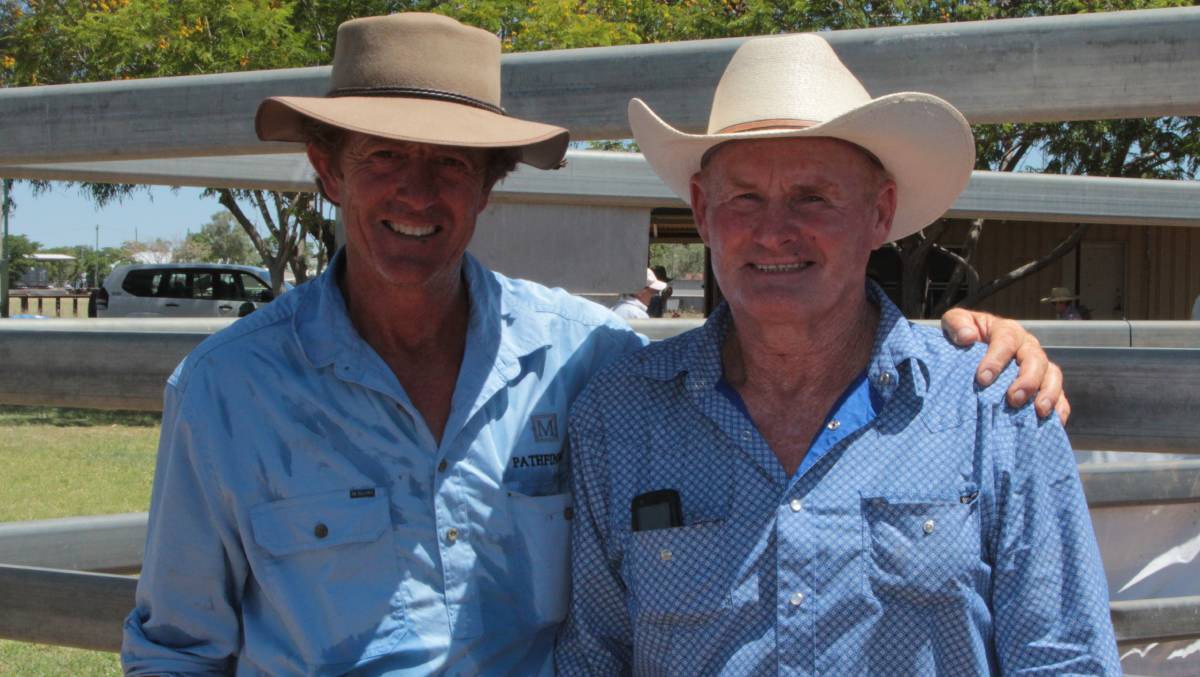 It was the stud’s third sale at Barcaldine and according to principal Nick Moyle, it was also the best.

“We sell between 450 and 500 bulls down south and like having this northern outlet.

“We think people like their tremendous thickness, volume and docility.”

Although not recording the best clearance on the day, 45pc, Robert and Anthony Close’s far western Victorian KW stud sold the second top-priced bull on the day, Kurra-Wirra J144, for $9000.

The 100 per cent Red Angus bull from one of the stud’s foundation cows went to David Gleeson’s Beaufort Pastoral Co at Alpha. 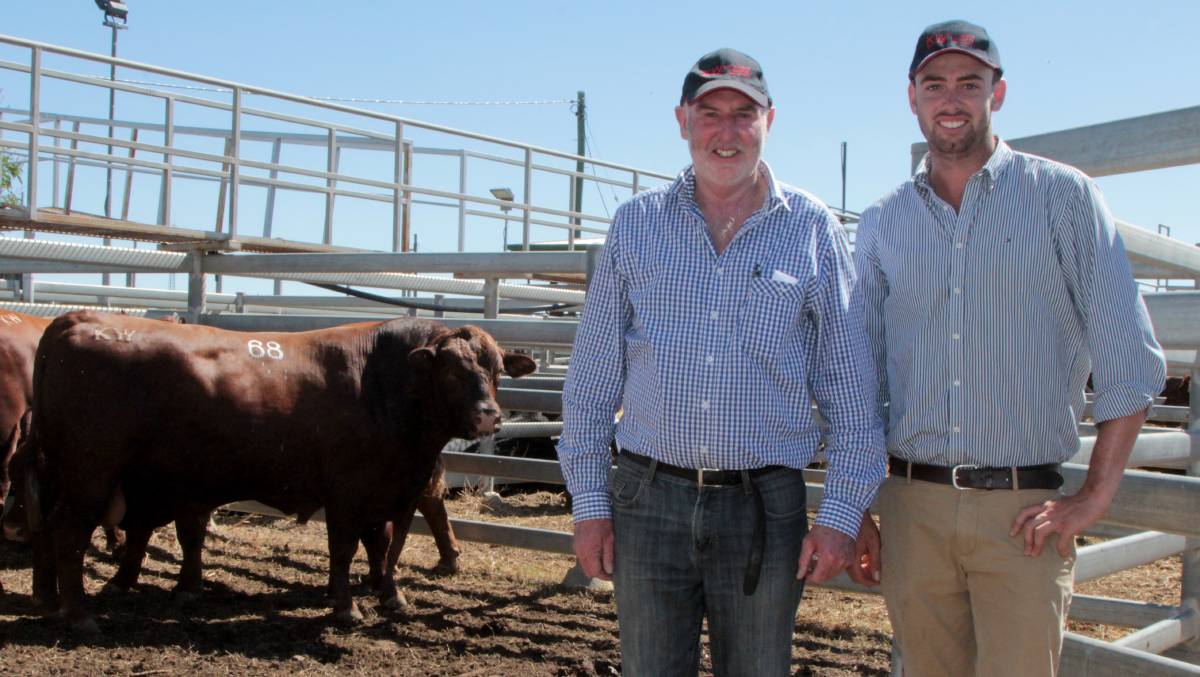 Anthony and Robert Close, KW Red Angus and Senepol stud, with some of the bulls in their draft of 31 offered.

“We have bulls at Katherine, Camooweal and Normanton, where they invariably ask for slick coats, but people tended to want hair today.

“I guess it depends on who turns up on the day but Red Angus and Senepol cover all the bases you want, and if you add the slick coat, they can be fertile in the north too.”

The Topstock regular vendors said that while they were down on clearance rates, their prices were up.

Pine Villa Red Angus sold 23 per cent of their catalogue.

The Glen’s Mike Gadd was reasonably happy with his sale average of $4066, saying he thought his Grey bulls were starting to gain greater recognition in the hotter parts of Queensland.

“They have a lighter coat and all Angus genetics,” he said. “We performance record our Angus and Greys together and use some of the same sires.

“It makes sense not to breed black cattle in a hot climate. We notice on a hot day the Greys are out grazing and the Black cattle are in the shade.” Longreach Pastoral College students taking in the bidding for genetics at the Topstock sale.

Sale representative James Lilburne said there had been a lot more confidence at this year’s sale.

“The Reds were a little bit tough but the ones that sold, sold well.

“We’ve sold over 900 through Queensland and the Northern Territory. They throw good calves and have great success in feedlots.”

He said that considering ongoing drought conditions in many parts, the sale had been a success, with buyers from north of Rockhampton, Monto, Emerald, Roma, Charleville, Blackall and Tambo areas operating.