Flags waved, horns tooted and beers were offered, but most of all, tears flowed as the Burrumbuttock Hay Runners completed an epic mission to deliver 5000 big bales of hay to the most drought-affected parts of western Queensland.

Flags waved, horns tooted and beers were offered, but most of all, tears flowed as the Burrumbuttock Hay Runners completed an epic mission to deliver 5000 big bales of hay to the most drought-affected parts of western Queensland.

The 125-truck convoy rolled into Ilfracombe at dusk on Friday night after completing an 1860km journey that will go down in the record books. 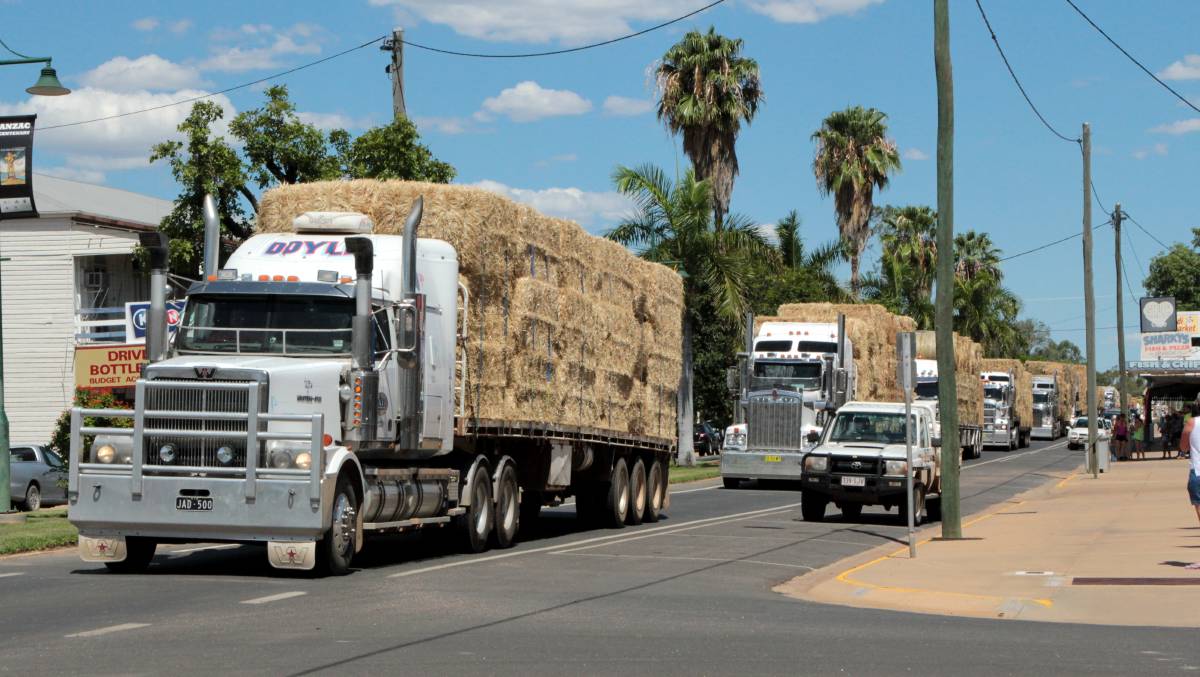 +44
All the photos from the end of the record-breaking journey at Ilfracombe.

They were greeted with heartfelt thanks the length of their journey through Queensland, which has endured three long years of drought and hardship as many have emptied their bank accounts trying to keep stock alive.

As the loaded roadtrains rolled into their final destination, social media erupted with praise for the gesture of support from fellow Australians acknowledging how tough some of their food producers were doing it.

The loudest praise was for instigator Brendan Farrell, fourth-generation farmer, who has spent four-and-a-half months, “a lot of money on the phone, a lot of nights on the phone, emails, permits, I can't even think of all the time”, with many saying he was deserving of Australian of the Year status.

MASSIVE congrats to #burrumbuttockhayrunners for what they have achieved today! Something our polly's never could! <3 True Aussies! #auspol

On Saturday morning as trucks began unloading at 4am and truck after truck arrived from properties some hundreds of kilometres distant, most people expressed the same thought – “how are we ever going to repay these people for the most amazing generosity we’ve ever seen”.

Alongside the gifts of hay were donations of goods from Drought Angels, and hair and beauty treatments supplied from Emerald practitioners wanting to do their bit to help.

As storms tantalisingly blew up and then blew out in the hot afternoon, helpers began set up for a blow-out for the bush at the Ilfracombe Rec Centre, stocking bar fridges, doing sound checks for Jane Denham, and distributing care packages.

I'm so proud to be Australian! You guys are amazing! Everyone please show your support for these incredible guys :) #Burrumbuttockhayrunners

"We're feeding their stock, but we are also taking up entertainment to feed the soul as well," Brendan said.

"Just to give them three or four hours off the farm so they can forget about the drought – it's important, really important.”

He has been quoted as saying that his plan was to let everyone know the drought in Queensland was still happening.

"It is just letting third-, fourth-generation farmers know that there are still people who care, whether it is my organisation or other people – people are still helping.

"It is keeping the dream alive, that is all we are doing."

He certainly achieved that in Queensland this weekend.