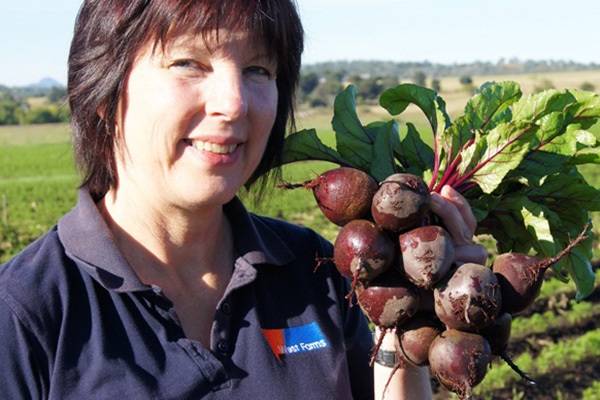 Narelle West at home on the farm in the Fassifern Valley near Kalbar, with some of the beetroot used in Kent's Produce products.

BEETROOT is not a commonly featured item on the stereotypical Australian shoppers grocery list, but Scenic Rim beetroot growers Narelle and Kent West are combating this.

BEETROOT is not a commonly featured item on the stereotypical Australian shoppers grocery list.

Negotiating how to prepare, cook and eat beetroot, and avoiding its lethal clothing stains, has often seen this vegetable put in the ‘too-hard basket’ for modern consumers.

But Scenic Rim beetroot growers Narelle and Kent West are combating this misconception by making beetroot more accessible and easier to eat.

“People get frightened of beetroot because they think it’s so messy,” Narelle West said.

“But it’s not, it’s so beautiful to eat and worth it.”

Growing an array of vegetables from carrots and green beans to bunching beetroot, on their farm near Kalbar in the Fassifern Valley, Narelle, her husband Kent, and their son Liam have forged a vegetable growing business for over 25 years, which they’ve now diversified into a value-added business from their primary product.

About a year ago they developed Kent’s Produce - a range of valued-added fresh beetroot and carrot - julienned, seasoned and flavoured with delicious citrus, and packaged in attractive jars.

Their new business venture was devised as a way of producing delicious, ready-to-eat fresh vegetables, mixed with local vinegars and herbs, and it’s a healthy range of condiments made locally from their excess carrot and beetroot crops.

“We wanted to make it simpler for people to eat beetroot and we decided to start with julienne because it’s more versatile,” Narelle said.

“To start we have made two carrot and two beetroot products that are quite distinct. Their flavours are very unique and very different.”

Narelle’s idea of value adding products took several years to come to fruition, and after experimenting with beetroots, they finally kick-started production when the West’s stumbled on a local commercial kitchen that could be utilised to produce their products.

Narelle worked with Jennifer Beadnell from local food manufacturer Health Sense-Sations to create the recipes for the jars of julienned carrot and beetroot mixes which are hand sorted, mixed and packaged in their commercial kitchen in Kalbar.

“We’ve had a really favourable response so far,” Narelle said.

“They are a gourmet line though, and won’t compete on the supermarket shelves with a tin of beetroot, but in saying that, there’s a lot of product in there and a little bit goes a long way.”

“A little bit goes a long way as they are all very robust in flavour,” she said.

“My aim is to get people to eat healthier, but it’s got to be in the world we live in of convenience.”

Narelle said Kent’s Produce condiments are shelf stable and work well thrown into a salad, for dressing up vegetables, or adding some glamour to the traditional meat and three veg combination.

“If you need something quick or someone pops over for a barbecue you can throw together a quick salad, dress up your chicken or just put it in a bowl on the table," she said.

“It’s really something to get different flavours out of a very mainstream vegetable.

“I love to cook and entertain, so we’ve just tried to tick all the boxes to think how people could use these products.”

Narelle also has plans to expand the range to jarred baby beetroots dressed in vinegar.

“There’s definitely massive scope for what we can do with it in the future. It’s a niche market, and apart from pickled onions there are limited other similar products on the shelf.

“There’s nothing else out there, apart from your jar of pickled onions and occasionally you see pickled beetroot but it’s all got added sugar in it.

“Our friends who are very strict with their diets are more than happy to have a spoonful of carrot or beetroot on everything because they know it has got the flavour and the health benefits.”

Narelle has been involved in the growing side of the vegetable business her whole married life and now relishes the chance to try her hand at a new angle of beetroot and carrot growing.

“It’s great to have something new that I believe in and I think it will be helpful and useful for people and good for them as well,” Narelle says of her range.

She has spent over two decades in the fresh produce industry and knows how important it is for consumers to recognise where they put their dollars and what they put in their mouths.

She feels strongly about food education which is why her range of value-added beetroot and carrot condiments are free of any harmful ingredients.

“We have to value the food that we produce. People will complain about $3.99 for broccoli but a kilogram is a lot of food. People go and buy a coffee and it’s gone in five minutes.

“It’s important that we get that message across that eating healthily is not hard, it’s about priorities.”

Her advice is to shop smart and buy what’s in season, because it tastes better and you know it’s fresh.

“The message is coming from all directions and people are becoming more in tune with what they put in their bodies but there’s still a way to go in changing people’s eating and buying habits.

“Kent’s Produce products are a way to achieve unprocessed meals with wholesome foods and healthy ingredients.”