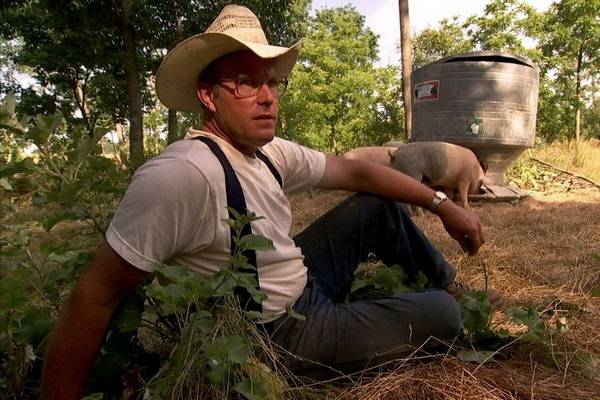 Virginian farmer Joel Salatin was in the Lockyer Valley last week for the RegenAG Masterclass series.

LARGER-than-life Virginian farmer and self-confessed "environmentalist-capitalist-lunatic-farmer" Joel Salatin was back in Australia last week as part of the RegenAG Masterclass series.

LARGER-than-life Virginian farmer and self-confessed "environmentalist-capitalist-lunatic-farmer" Joel Salatin was back in Australia last week as part of the RegenAG Masterclass series.

Speaking at the Lockyer Valley Cultural Centre, Joel gave a series of lectures over three days based on his own livestock production techniques, with the hope Queensland producers would begin implementing them on their own properties.

A big believer in producing and marketing locally, Joel is a third-generation farmer working his property alongside his wife Teresa, son Daniel, daughter Rachel and their respective families.

Modelling his business, Polyface Farm, on a 'back to basics' approach, Joel proudly raises rabbits, chickens, pigs and cattle in an organic, chemical and cruelty-free environment.

"The temptation is always to assume, well, 'they've got it easier', 'it rains over there' or 'it's not as far to market'," Joel said, adding it was important to remember that the struggles and opportunities farmers have worldwide are far more similar than not.

"We all need to start implementing the broad principles of farming, to hydrate our landscape and realise that 90 percent of our weakness as producers is in decision-making and management they're not in tools and gimmicks."

Joel runs his cattle on pasture for the majority of the year and sheds the herd for 40 days during winter.

"When we talk about pasture management, it is all about trying to maximise the amount of time the plant is in the fast growth cycle.

"If cattle aren't moved and they continually graze, they become lazy - just like if you or I always had access to a buffet of food, we'd be lazy, too.

"Farmers need to simply teach their cattle how to graze aggressively and if they do this, the herd will become equal opportunity grazers where they'll eat anything.

"It only takes us two months to train them to do this and not only do they graze less selectively, they also utilise more of it in their average daily gain.

"On our farm, a small herd of about 80 will be given half-an-acre each day and we will move them every day at 4pm, just like clockwork, and so they get really easy to handle.

"You can't ever get them to utilise all the grass - if you did the ground would be bare and they'd go backwards.

"By moving them every day, we tap into as high a performance we can get, as well as the highest utilisation we can get.

"If you decide to keep them past that first day, the type of forage the animal eats on day one is so different to the type of forage on day four. Their gut bacteria is having to change to deal with it and this can affect their performance.

"They go in eating ice-cream and they come out eating livered onions and they're not eating as much of it.

Only supplementing with basic minerals, Joel insists on having a supply of stored forage as an insurance policy when the season turns bad.

"We don't always have a continuous supply of forage, so we actually have more hay than we would if we were traders.

"It doesn't mean we feed any more than anyone else - it just allows us to sleep at night and not panic at the first sign of drought."

Joel is a firm believer in allowing your stock to grow and fatten with little stress, while also giving the herd as many nutrients and opportunities for production value as possible.

"There are some people who say beef is not worth eating if it's not gaining a pound-and-a-half every day of its life, and if it has one day where it doesn't gain weight, then it's not fit to eat. I don't buy into that at all.

Joel puts his current success down to the frugality of his parents, as he grew up learning to be creative in a minimalist environment.

"We were forced to capitalise on our own resources, our own compost and manure, and solar energy.

"Most farmers see their farms as half-empty and they don't have a clue about the potential in resources they can generate from having very little."

Joel uses line-breeding to weed out the weaknesses of his herd and discover its strengths.

"We can come to 50 percent but not more, and what this does is super-expose the potential of your herd," Joel said, adding he always slaughters the mother of any bulls selected in order to avoid any unwanted genetic inferiorities occurring. All this militates against modern thinking, but if we never select a bull from a cow younger than 12, it would fundamentally change the health of the world's cow herd.

"At Polyface, we select several bulls from old cows, keep them through the winter and don't do anything special for them. The ones that stay together, we keep; the ones that fall apart, we castrate. That way, we let function drive what we're looking for."

Joel vehemently advocates for properties that are diverse, don't use synthetic chemicals, are animal friendly and have sustainable marketing systems.

"I believe our Polyface model represents a positive future for farming, and I want farmers and producers to be brave enough to develop agrarian enterprises that will be a boon to the economy, emotions and ecology of the communities in which we live."