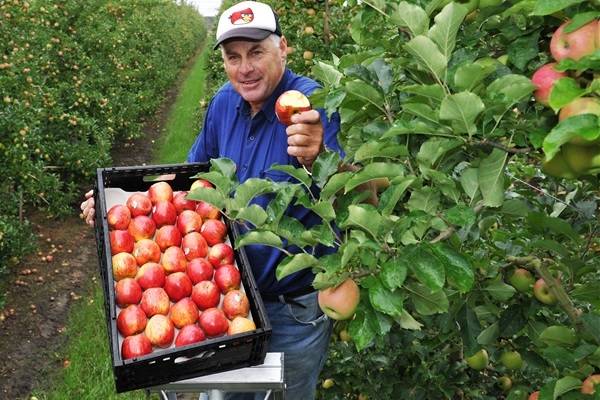 Stanthorpe apple grower Ugo Tomesel, the Queensland representative of the National Apple and Pear Grower organisations, who says 85 per cent of his staff are backpackers. Picture: RODNEY GREEN

THE Queensland horticulture industry would be on its knees without its constant source of overseas backpackers seeking temporary work to satisfy their holiday working visa requirements.

THE Queensland horticulture industry would be on its knees without its constant source of overseas backpackers seeking temporary work to satisfy their holiday working visa requirements.

That’s the comment from Stanthorpe apple grower Ugo Tomesel, the Queensland representative of the National Apple and Pear Grower organisations, who says 85 percent of his staff are backpackers on temporary working visas from Europe and Asia.

“There are not many locals around and no choice,” he said, speaking to Queensland Country Life.

“It’s difficult to find Australian workers, that’s just the way it is at the moment. This just seems to be the case for all fruit and vegetable growers in Queensland at the moment Others will all tell you the same thing.”

Backpackers, aged 18-30 who wish to travel and work for up to 12 months in Australia arrive equipped with the Work and Holiday visa, which allows them to supplement the cost of their holiday through periods of temporary or casual rural employment.

“We employ about five or six permanent casuals all year round and the rest are backpackers – 20 or sometimes more, depending on our harvest,” Mr Tomesel said.

But it’s a tough flow-on effect for Mr Tomasel’s business, as workers stay only a few short months before taking off again to travel the country.

He said it was frustrating to constantly train workers before they up and left, which in turn sees a lack of productivity on the property.

“We have a very high turnover and there are a lot of costs in changing workers and re-training.

“Most have never seen an apple tree in their life, so it’s not ideal. There’s a big downside to such a high turnover.

There’s a big pool of workers out there, and if it wasn’t for them, I think we’d lose half our fruit and vegetables in Australia.

“We’d be absolutely dead without it.”

Mr Tomesel said about 60-70 percent of workers would stay on working on the farm if their visa permitted, thanks to high Australian wage rates, but also because backpackers often had no work to return home to, particularly in Europe.

Some workers even return for a second term of employment, which is allowed for a further six months if backpackers return to work for the same employer with whom they worked under their first Working Holiday visa.

Picking is underway at Mr Tomesel’s 40 hectare orchard at Stanthorpe, and harvest will continue at full pace, until May.