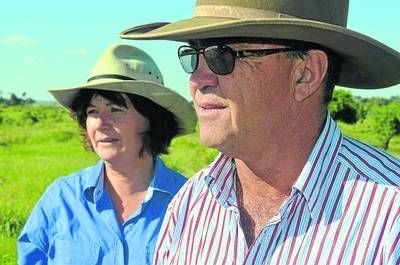 State Minister for Energy and Water Supply Mark McArdle said he would meet with impacted landholders to hear their concerns.

More than 100 landholders north of Yuleba are currently attempting to negotiate with State Government-owned energy corporation Powerlink over 100km of proposed transmission line and four substations, west of Wandoan.

The Wandoan South to Eurombah Transmission Network Project has been requested by Australia Pacific LNG (APLNG), majority owned by Origin Energy and ConocoPhillips, to supply power to future gas processing facilities across the Western Downs.

In a media statement Powerlink said it used the CID approach throughout Queensland for all transmission projects as it provided a "consistent and transparent legislative framework, with multiple formal opportunities for stakeholder input".

Despite the claims of Powerlink, when Queensland Country Life travelled to Yuleba late last week, impacted landholders told a contrasting story. Some producers reported the company had refused to provide even basic details about the project, such as the proposed location of the infrastructure, because it had not yet released its formal report.

These landholders claimed this "lack of transparency" rejected notions of "fair and reasonable" consultation and only served to fuel distrust and frustration among impacted stakeholders.

According to the CID guidelines which have been in place in the Sustainable Planning Act since 2006, a company applying for CID status is only required by legislation to acknowledge the potential for stakeholder concerns within its initial report.

Once the initial assessment report is prepared, legislation only commands the company to inform "relevant local governments" and "relevant public sector entities" of its release.

Any other parties identified in the initial assessment report, which could include everyone from landholders whose property the infrastructure runs through, to conservation groups, do not have to be formally advised of the release of the report.

The company is merely expected to place a notice on its website and advertisement in the newspaper announcing the report is now available.

From this point, any impacted stakeholder must prepare a formal written submission detailing concerns over the project, which can be dismissed if not appropriately formatted.

The landholders will then be provided a second round of 15 days to formally respond to the updated report. Powerlink estimates the transmission lines will function across the district for up to 70 years.

Once the second round of submissions are received and addressed in a final assessment report, the relevant minister (Mr McArdle) will consider whether adequate consultation has occurred and adequate account has been taken of issues raised during consultation, according to the criteria detailed in the Sustainable Planning Act.

"The act is intended to balance the interests of landowners (and future use of the land) with the environment and the community to realise development in a sustainable manner that caters for future needs," Mr McArdle told Queensland Country Life.

"I am confident that Powerlink applies the provisions of relevant legislation and the community infrastructure designation guidelines competently and fairly. However, I am also aware of landholders' concerns."

"The government is committed to a new consultation model regarding electricity network expansion and is currently working with Powerlink to develop a model that focuses on earlier community engagement with the community."

Gary and Kerry Ladbrook, Bulah, Yuleba, face the construction of a sub-station on their property alongside 275kv tower transmission lines by APLNG and Santos.

Mr Ladbrook said given that land access issues around resource sector development on farms had been repeatedly reconsidered by successive governments to ensure a fair and reasonable negotiation process for landholders, a similar approach should be taken to reconsider the practicality and fairness for impacted landholders within the CID guidelines in the Sustainable Planning Act.

"We are not receiving any say whatsoever over this infrastructure and the government needs to urgently look at the process," Mr Ladbrook said.

"We want to be able to negotiate about infrastructure placement before the release of their initial report.

"We need to see our concerns are being taken seriously."

Impacted landholders have launched an online petition on a State Government website calling for the power project to not be designated as community infrastructure.