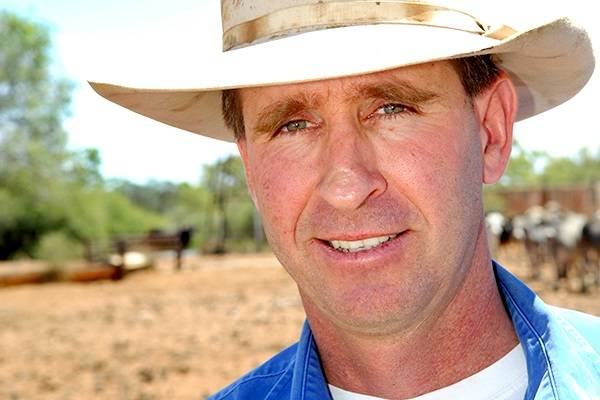 VIDEO: THE beef industry is reeling at the shock of losing one of its true giants and mourning for 'what might have been' had the life of Zanda McDonald not tragically stopped this week at 41 years too young.

The beef industry is reeling at the shock of losing one of its true giants and mourning for 'what might have been' had the life of Zanda McDonald not tragically stopped this week at 41 years too young.

Zanda McDonald was a man of vision and a man of action, whose plans and passion for his family business were as big as his sprawling North Queensland holdings.

If the future of beef lies in assuring quality for the consumer through every link of the value chain, then Zanda McDonald truly was beef's 'man of the hour', a no-fuss, no-nonsense ambassador who led from the front.

Educated via School of the Air as a boy on his family's operations near Cloncurry and then at Downlands College in Toowoomba, Zanda was equally at home working his country and cattle or when doing business in the city - although as he conceded to Queensland Country Life last year the transition from cattleman to meat retailer had proved tougher than expected.

"It's been a huge transition and sometimes I wonder why I've done it," he said.

"But we have a solid grasp of our cost base now, which puts us in a good position for growth in 2013. One of the biggest things I've learnt is that it's a high cash flow business, where you buy it in one day and it's sold the next. You really have to stay on top of your game."

Belonging to a genuine Queensland pioneering family, Zanda McDonald's purchase of the Super Butcher chain brought him another level of prominence in the public eye in 2012.

The purchase of the six-store outlet last July with Auswide Meat Whoelsalers principal Gary Stone, rescued the company from $8 million in debts, proving the saviour of the company's nearly 200 employees.

Auswide was Super Butcher's major unsecured creditor, owed $960,000, while the McDonald family's MDH group was owed $170,000. Despite the business' sullied history, Zanda saw nothing but growth opportunities when he took ownership on July 10.

"We believe Super Butcher to be a great business model and we want to make it available to benefit Australians elsewhere," he said.

"We expect to open a Brisbane outlet along the lines of the signature store at Eagle Farm within 12 months and will be targeting Sydney, Melbourne and Canberra. "Additionally, we see early opportunities in Toowoomba and the Sunshine Coast."

With Zanda's tragic passing, it is unknown at this stage who will drive those expansion plans in the future, as well as the leadership of the MDH empire,

which manages one of the world's biggest cattle herds and a fully developed vertically integrated beef supply business that involves breeding, backgrounding, lot feeding, live cattle export and marketing its own branded beef domestically and across the world.

MDH runs about 175,000 head of cattle across 11 cattle stations from its base near Cloncurry, finishing many animals at the company owned Wallumba feedlot on the Darling Downs and marketing its beef under the company's own brands.

With an estimated 34,000 square kilometres of land in Queensland under its care, MDH is among the largest landholders in the world, with a footprint bigger than the land mass held by Taiwan or Belgium. In fact, if MDH were a country, its properties combined would be roughly equal to the 140th largest country on the planet.

Such a massive presence in the industry comes with considerable marketing clout but also exposure to the wider community, many of whom have little idea how beef is produced and now theoretically number among those all-important retail customers coming through the doors of the company's six Super Butcher outlets.

It's partly why the MDH operation partnered with Bayer and the University of NSW to trial a spray-on anaesthetic applied during the de-horning and hot iron branding of calves.

As Zanda explained to QCL last year, the use of pain relief during on-farm procedures will become increasingly crucial in the selling of beef to customers who want to be reassured the beef they are consuming has been produced with the welfare of animals in mind.

"Since the live export debacle last year, it's really brought it home that animal welfare groups are going to target practices like de-horning, branding and castration here in Australia," he said.

"From a commercial perspective we can see a fantastic opportunity by being able to stand up with our hands on our hearts and say we have been one of the first cattle companies in the world to do something serious about this important animal welfare issue."

The McDonald family has been at the forefront of innovation and technology adoption to improve their business for decades as well as a willing contributor to beef research to further the Australian beef cattle industry.

The company has been heavily involved with scientific bovine genetic technology, enabling the potential accreditation of yearling grainfed bulls to meet MSA standards. MDH, in collaboration with the CSIRO, is the first commercial cattle producer in the world to trial germ cell transplantation technology, known as testis cell transfer (TCT).

In August 2011, MDH was named AgForce's producer of the year in the innovation category at its annual Red Meat Awards during the Ekka in Brisbane.

The sheer size and scale of the MDH enterprise is breathtaking.

Cattle are bred on the properties located in the Cape York Peninsula area. These cattle are then backgrounded on properties in the Cloncurry,

Boulia and Winton region. Beef cattle that are selected for the grassfed market are finished on the properties located in the Central Highlands, which have

excellent pastures, including 2835 hectares of leucaena.

The cattle that are selected for the grainfed market are road transported to the Wallumba Feedlot located near Condamine on the Darling Downs.

Wallumba Feedlot was purchased by MDH in 2001. At this time it was dry rolling grain with a 1000 head standard cattle unit (SCU) capacity. Over the next three years MDH expanded Wallumba out to 10,000 units.

Each year the feedlot turns off about 23,000 grainfed cattle for the company's Wallumba and Alexander brands. These cattle are road transported north from the Condamine to the JBS Australia abattoir located at Rockhampton.

Another 10,000 grainfed cattle that pass through the feedlot annually are sold to other South East Queensland based abattoirs with the majority of the cattle delivered to JBS Dinmore.

MDH is passionate about marketing their own 100 day grainfed beef, which is branded under two labels being the Wallumba and Alexander brand. MDH has a close strategic alliance with JBS Australia in Rockhampton who contract process the grainfed cattle destined for the export market.

As Zanda explained in an interview with QCL in 2011, consumers who buy MDH beef are not only gaining a great-tasting, quality assured product but a reputation they can trust and feel comfortable taking into their homes.

"MDH offers consumers a rich and unique story when they purchase the Wallumba and Alexander brand with a family heritage in the Australian beef industry reaching back more than 180 years," he said.

The Wallumba and Alexander brand is now exported to more than 15 countries, underpinned by marketing smarts that can be delivered on the back of the company's efforts to control costs of production through selective use of technological productivity tools.

MDH in collaboration with the CSIRO was the first commercial beef producer in the world to trial germ cell transplantation technology.

The objective is to breed a composite herd that will have a greater productivity in the feedlot relating to higher marbling scores, better saleable meat yields and tenderness qualities for better grading acceptance into the MSA category.

"The technology enables the infusion of elite genetics to produce calves with improved market characteristics while using Brahman bulls that are adapted to the tropical environment," Zanda told guests at a packed breakfast forum last year during Beef Australia 2012 in Rockhampton.

Twelve months earlier, when he accepted the innovation award in Brisbane, Zanda said MDH was strongly focused on expanding export markets for the Wallumba and Alexander brand of 100 day grain fed beef.

"Producing and marketing your own brand is a challenge. However it creates long term value adding opportunities for the business along with market certainty for the MDH business model in the future," he said.

In October 2010 MDH was the first Australian company to be registered by the Brazilian Government to export beef to the lucrative Brazilian market.

The objective of the study was to demonstrate that high quality meat could be obtained from grainfed entire male cattle. Professor Lee Fitzpatrick, Dean of Veterinary Science at the School of Veterinary and Biomedical Sciences of JCU received a $948,500 funding grant from Meat and Livestock Australia (MLA) to conduct the research.

Zanda said previous research had demonstrated significant productivity gains in entire male grainfed cattle with some live export markets actually paying a premium for entire males. However, the Australian domestic market has historically heavily discounted young bull meat because of the perception that the meat quality was inferior.

MDH supplied the entire male Bos indicus cattle for the project from properties on Cape York and Cloncurry. These young bull calves were then transported to the Wallumba Feedlot on the Darling Downs.

The bull calves have demonstrated weight gains in excess of two kilograms per day in the feedlot while exhibiting a docile temperament.

In his last, in-depth interview with QCL last year, Zanda said MDH was in the process of obtaining Ausmeat and MSA accreditation to market yearling grainfed bull meat with the potential to create a completely new market segment in the Australian beef industry.

"This is truly an outstanding achievement bringing significant potential to market young, entire male cattle from northern breeding properties to be value-added through grain feeding," he said.