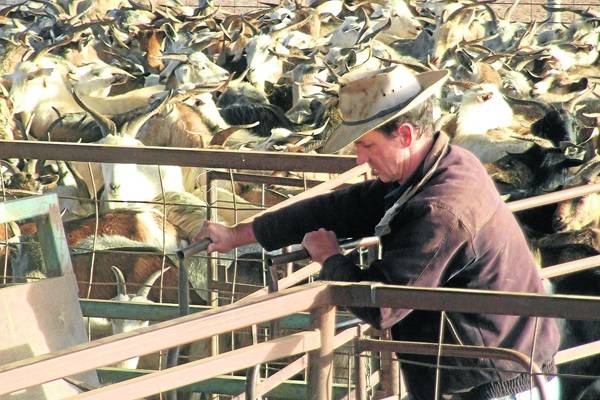 THE largest goat processing facility in the world, Western Meat Exporters at Charleville, is turning its attention to the enormous possibilities of the Chinese market after a successful foray to Shanghai in May.

THE largest goat processing facility in the world, Western Meat Exporters at Charleville, is turning its attention to the enormous possibilities of the Chinese market after a successful foray to Shanghai in May.

Sponsored by Meat and Livestock Australia, WME was part of a group of 14, mostly beef and lamb producers, who mounted a display at a food expo in the city, and was overwhelmed by the demand for goat meat.

Onlookers described their stand as looking like a blackjack table paying out, such was the scrum of people surrounding it.

"It was a case of putting two and two together," said Neil Duncan, WME's managing director.

"We had been selling into that market for the last couple of years but had nothing solid. They didn't know where to buy goat meat from and we didn't know who to sell it to."

Since then the company has written $3m worth of orders and Neil says there are more to come.

While the US and Taiwan have traditionally been the biggest importers of Australian goat meat, Neil says the flat US economy and loosening of import regulations by China, along with a cashed-up attitude, makes China an attractive proposition.

Goat is the most eaten meat around the world, regarded as nutritious but not expensive, and Western Meat Exporters slaughter 15,000 animals a week, or 3000 head a day.

The company has developed a number of different products but Neil says the biggest line is for a skin-on product, in which the hair is taken off, much like a pig.

"We also do something the Europeans call a 'smokie', where you have a gas torch and you brown the skin," he said.

"The Hispanics are used to singeing them over a fire to remove the hair and they like that burnt taste."

WME is the only processor in Australia that doesn't have a boning room, as customers prefer the bone to be left in. According to Trade and Investment Queensland spokesman, Morgan Gronold, the meat is frozen and cut into cubes with the bone in, then sold in 1kg bags.

"Customers traditionally use their hands to eat - they want warm product and to hold the bone," he said.

"The cold snap in the northern hemisphere is good for us - people turn to comfort food like this."

Neil Duncan is dismissive of Goat Council of Australia initiatives to find new ways of presenting product, being a believer in giving people what they like and know. He also says that government policy makes or breaks businesses like his and he would move his operations offshore tomorrow if he could.

"Everything is getting too expensive," he said. "We just can't compete, and electricity prices are making things pretty tough."

The lack of employees is another detrimental factor, according to Neil.

The Charleville abattoir has an operating capacity for 200 employees but only has 175 on site at the moment, as they are too difficult to source.

Australia has a rangeland goat population of between three million and five million, which is attractive because of the leanness of the animals.

Western Queensland suppliers have been urged not to move too far towards pure Boer genetics for fear of introducing too much fat cover on their product.

WME director Campbell McPhee said Boers had a place in putting weight into a flock but producers should be cautious about how far they go.

"People like to cook it in slow cookers, in hangis or on spits - fat is a no-no," he said.

Processors like Western Meat Exporters are keen to see more producers enter the market, to help stabilise supply and make the most of emerging opportunities in China and South East Asia.