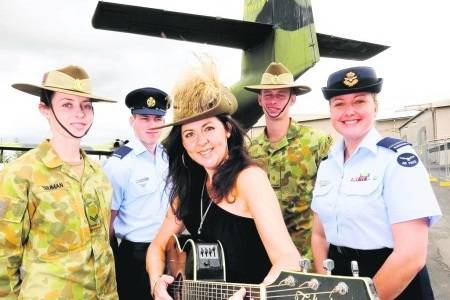 Music star Tania Kernaghan (centre) is warming up to deploy to Winton in April for a key Anzac centenary commemoration.

SPECIAL contingents of celebrities, civic leaders and service personnel are preparing to deploy to Winton in outback Queensland next April for an Anzac centenary commemoration set to rank among Australia's most memorable.

SPECIAL contingents of celebrities, civic leaders and service personnel are preparing to deploy to Winton in outback Queensland next April for an Anzac centenary commemoration set to rank among Australia's most memorable.

By road, rail and air they'll travel, from all points and across the sea, to muster in Winton for two days of events marking 100 years since the legendary landing at Gallipoli.

Music stars Tania and Ray Kernaghan, as well as John Paul Young, will be among an estimated 300 VIPs, entertainers, military, media and special guests who will considerably swell ranks attending the town's Anzac Day dawn service, march and associated celebrations.

Winton, which contributed one of Australia's highest per capita World War I enlistments, will even host a special delegation from namesake Winton, New Zealand, honouring the trans-Tasman Anzac link.

At the heart of it all, exemplifying the tragedy and valiant sacrifice of Gallipoli, will be the story of a young farmhand from Winton's Bladensburg Station, who signed up as soon as he turned 18 and joined the first convoy to the Great War.

Private Colin Morgan-Reade of the 2nd Light Horse Regiment arrived under fire at Anzac Cove on May 12, 1915 - the youngest in his troop. On May 30, Colin was shot dead.

In conjunction with the 2015 Angel Flight Outback Trailblazer charity tour, Winton's impressive centenary salute will begin on Anzac eve with a campfire dinner hosted by the Kernaghans on the very site where Colin Morgan-Reade lived and worked before enlisting.

The large-scale outback Anzac centenary celebration is being mounted thanks to collaboration by Winton and the Remote Area Planning and Development Board (RAPAD), which supports the award-winning Angel Flight Outback Trailblazer promotional fundraiser.

"We've worked closely with ADF personnel and the Winton community to mount a unique outback commemoration, and we promise deeply personal, moving and exhilarating experiences for all who attend," RAPAD chairman and Barcaldine Mayor Rob Chandler said.

"We are also working with Mates4Mates, the charity initiated by RSL Queensland to support wounded, ill or injured current and former ADF personnel and their families."

Winton, which now has a population of only about 900, sent 570 young men to the Great War, and 101 of them - including Private Colin Morgan-Reade - never came home.

Colin will be represented at the centenary events by his great grand niece, Jenny Milson of Longreach.

Her grandfather Colin Milson, named after his Anzac digger uncle, went on to be a Wing Commander and one of the RAAF's most decorated airmen in World War II.

"We are really looking forward to hosting such a large contingent of marchers and having the luxury of a live band," he said.

Celebrations will culminate in an Anzac Day progressive dinner dance, starting at the Waltzing Matilda Centre, moving to the North Gregory Hotel for a re-enactment of the 1895 first performance of Waltzing Matilda, and winding up at Winton's Shire Hall Supper Room.

A new exhibit paying tribute to the Anzac legend will open at the Waltzing Matilda Centre during the centenary week.

Entitled 'More Than Just A Name', the display mounted by the Winton community under the stewardship of former mayor Bruce Collins will remain open until the 100th anniversary of the November 11, 1918, World War I armistice, which began at 11am.