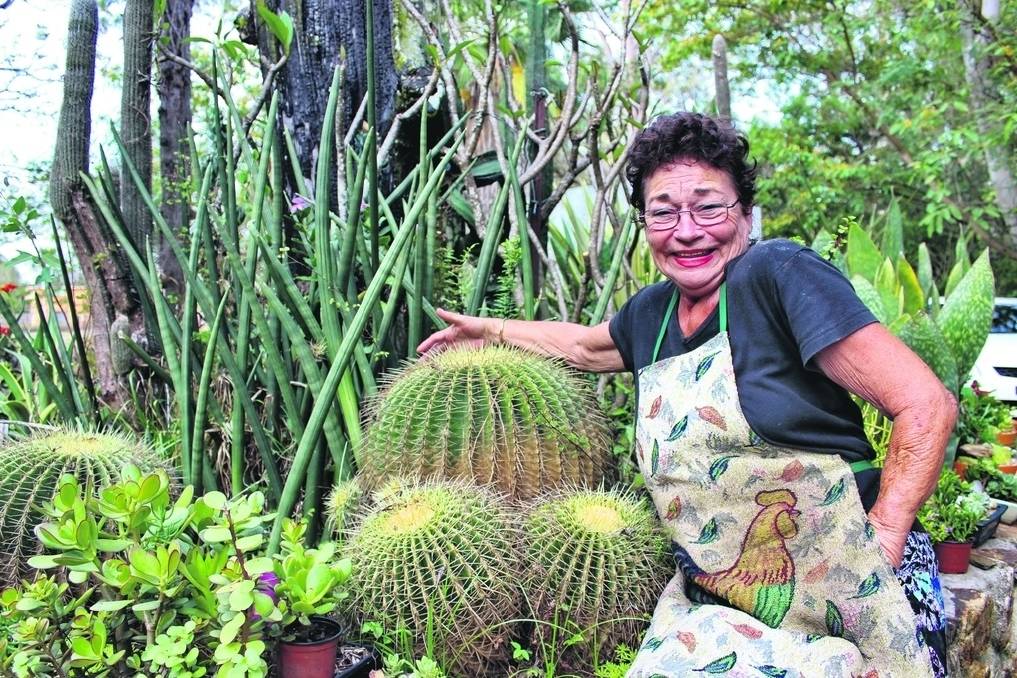 A WRITHING jungle of palms and vines reaches skywards, searching for the smallest beams of light through a surging mass of foliage.

A WRITHING jungle of palms and vines reaches skywards, searching for the smallest beams of light through a surging mass of foliage.

Margaret Buchecker's garden seems a world away from the bustling Logan Hyperdome near the Slacks Creek property she shares with husband Jim.

The couple have built a forest haven with giant staghorns, agaves and ferns among thousands of plants.

"I've always been interested in plants from an early age," Margaret said.

"I remember being given a small orchid plant when Jim and I were living in Mount Isa and we didn't know how to look after it.

"We decided to join the local orchid society so I could learn how to take care of it properly."

At age 22, Margaret's life-long passion for cultivating cuttings had only just begun to blossom, with Jim soon installing a small shade house in their backyard.

"We both became more interested in growing plants - all sorts of plants - and very quickly, the bush house filled up with every plant you could imagine."

"We decided to join the local orchid society so I could learn how to take care of it properly."

Living in the state's far north meant Margaret and Jim had little contact with other plant breeders and so would send away for cuttings.

"We had loads of indoor plants and begonias in particular - we would even send away to Tasmania to get begonia leaves!

"They're so varied in their leaf shapes and patterns.

"Some of the begonia flowers are absolutely beautiful and some of them are grown purely for the attractive leaf."

With Jim working in the copper mine and the small shade house overflowing, Margaret developed a retail nursery as a way to share her love of plants.

"I did a lot of propagating myself and the nursery was so successful that I couldn't keep up with the demand, so I had to send away to different nurseries in the south and they would send up plants every month by rail."

After 30 years in the nursery industry, Margaret and Jim retired to the outer suburbs of Brisbane for some much-deserved relaxation, but Margaret soon realised she needed her plants as much as they needed her.

"I got really bored so I went to check the markets out one day, and I thought I might like to have a little stall there as an interest."

"People became interested in them very quickly because even the common ones are very attractive...

Juggling excess water fees and dealing with ongoing drought, Margaret decided to invest her energy into hardier plants which could withstand the harsher Australian climate.

"I thought about how people could still have their gardens without it being expensive, and that's where the water-wise plants came in.

"Succulents are very water-wise and so I grew a selection of them to sell at the Woodridge markets at Kingston, and it's just progressed from there. I started out with the most common-looking things, but they're extremely easy to propagate and for people to pop into the ground and they'll just grow."

Margaret's customers soon cottoned on to the practicality of the succulent, and began asking her for rare breeds and little-known cacti species.

"People became interested in them very quickly because even the common ones are very attractive, and I do all of them myself."

"But there are harder ones to get because they're slow growing or more difficult to produce, and so I source the rarer succulents and cacti from a selection centre where I can purchase wholesale."