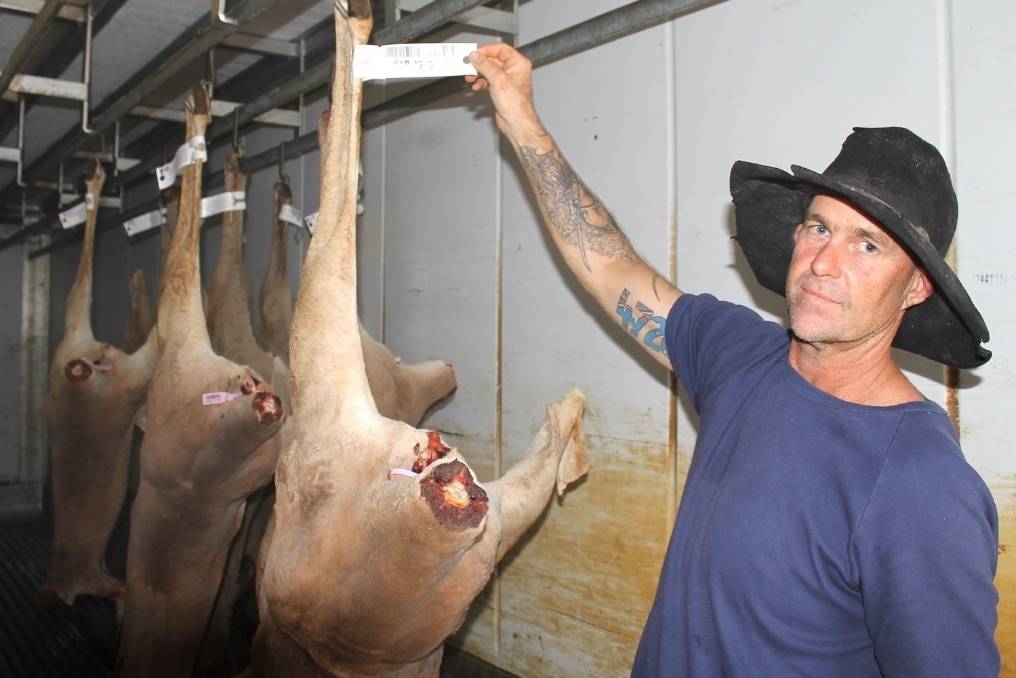 David Coulton welcomes tourists to his chiller box at Aramac to explain the harvesting industry and dispel myths.

THE future of Australia’s kangaroo industry lies in their meat being as sought after on supermarket shelves as beef, lamb, pork or chicken, according to Aramac’s David Coulton, and he is on a crusade to make that happen.

THE future of Australia’s kangaroo industry lies in their meat being as sought after on supermarket shelves as beef, lamb, pork or chicken, according to Aramac’s David Coulton, and he is on a crusade to make that happen.

As a kangaroo harvester he has shot thousands of them in the last 11 years and may be the last person you would imagine to be promoting kangaroos and their product, but he’s an outspoken advocate, describing the meat as “super food”.

“It’s the fastest, most powerful animal in Australia, without a doubt the healthiest animal on the planet, the real free range king and chemical free,” he said.

“I tell my kids they have a chance to be the new generation of centurions. If they start at this early age in life eating the right food they’ll be able to skip over to the pool at 100, pump out 50 laps and cartwheel home.”

Dave, known to locals as Cujo, takes his mission seriously.

Far from hiding his industry away, he welcomes the questions of visitors and all through winter cooks up backstrap with garlic or chilli for the many tourists across the way at the caravan park.

“I put up a sign to welcome everybody over for a look. I’ve had hundreds of people from every state in Australia in my chillers,” he said.

“Some are hesitant and watch from a distance. All have many questions.”

He remembers a woman in her seventies getting out of her car and announcing that she had a video camera, which he wouldn’t like.

“With a big smile I said, ‘You’re not allowed up here unless that’s going’. An hour later I shook hands and she asked if she’d live to 100 if she started eating kangaroo meat.”

It’s the “fluffy” image kangaroos have that is preventing more people understanding their healthy eating qualities, David believes, but he hopes the trend towards paleo eating will change that.

“I think the industry is about to go gangbusters.

“We don’t live in a perfect world, but the best thing to do is be clean and put all your cards up.

“I think we need every animal lover, kangaroo society group, PETA and so on, right on the heels of this industry.

“Lots of eyes and pressure has created a very clean and heavily policed industry.

“Long gone are the days where you brought in kangaroos flat stacked in a Holden ute and put in an unmonitored chiller.

“Now they are data logged every day and recorded – you have 12 hours to pull that carcase down below seven degrees, and they are picked up every single week in freezer vans.

David said hundreds of thousands of kangaroos had gone through the boxes at Aramac over the years and not one had been condemned.

He is pleading for sense to be brought to the debate and for people to consider what would happen if the harvesting industry closed.

“It’s not new; it’s been here a long time. You’re better off having someone harvesting roos that worships them than cowboys mindlessly murdering them without thought,” he said.

David believes the price he and fellow harvesters are receiving is making it harder for the professionals to stay on.

“You’ve got to shoot four days a week to make enough money these days.

“It costs over $100 a night to go out shooting and a flat tyre or mechanical problem means you dip below that.”

Down the road at Barcaldine’s IGA, kangaroo meat retails at $19/kg, which shows how many hands it has to go through to get to the consumer, David said.

“People want to eat it and they want to know more about it – they’re just timid.”

If kangaroo numbers in western Queensland were to drastically decline or if Mother Nature crippled populations, Aramac harvester David says he would be the first to shut his doors.

The self-professed kangaroo lover doesn’t believe any of the four main species being harvested are in danger of becoming extinct, despite the drought.

“I can’t vouch for any other area but the one I live in,” he said.

“Aramac is a very special place situated on the edge of the desert where it meets the black soil flats, and the kangaroos here are the most nomadic of all, criss-crossing in and out of the desert back to the black flats.

“I don’t think it’s a plague but a huge healthy environment.”

He likens numbers to the African savannah rolling with wildebeest.

“There’s a fellow here in his 80s, who’s shot kangaroos all his life and he’s never seen this many.

David describes them as invincible. He says they might kick their joeys out of the pouch when it starts getting dry but “you can bet there will be another one growing in there two days later”.

“I think to myself, surely this can’t keep happening, there must be an end, with 800 roos a week going through our boxes, only stopping for seven days over Christmas.

“Seasoned harvesters have shot the biggest and heaviest kangaroos of their life.”

David believes kangaroos, the grazier’s nemesis, are perfectly attuned to their environment.

“Both are competing for grass,” he said.

“I have humanely slaughtered thousands for the human consumption market.

“Not one has ever had an empty stomach.

“If you disturb a mob of roos, you can watch them hop away as far as the eye can see.

“They do this 10 times over. You can’t do that on an empty stomach.

“The energy they burn must be incredible and must require a lot of fuel.

“You’d think that you would at least find one roo with an empty stomach, one that hasn’t had time to feed, but it doesn’t happen.”

David’s family has raised several kangaroos and let them go with white cattle tags in their ears, which he sees from time to time.

He likes that the township of Aramac is home to old retired bucks, laying about back yards on their elbows.

“The outback is that vast, even with all the harvesting, kangaroos are still living to a ripe old age,” he said.