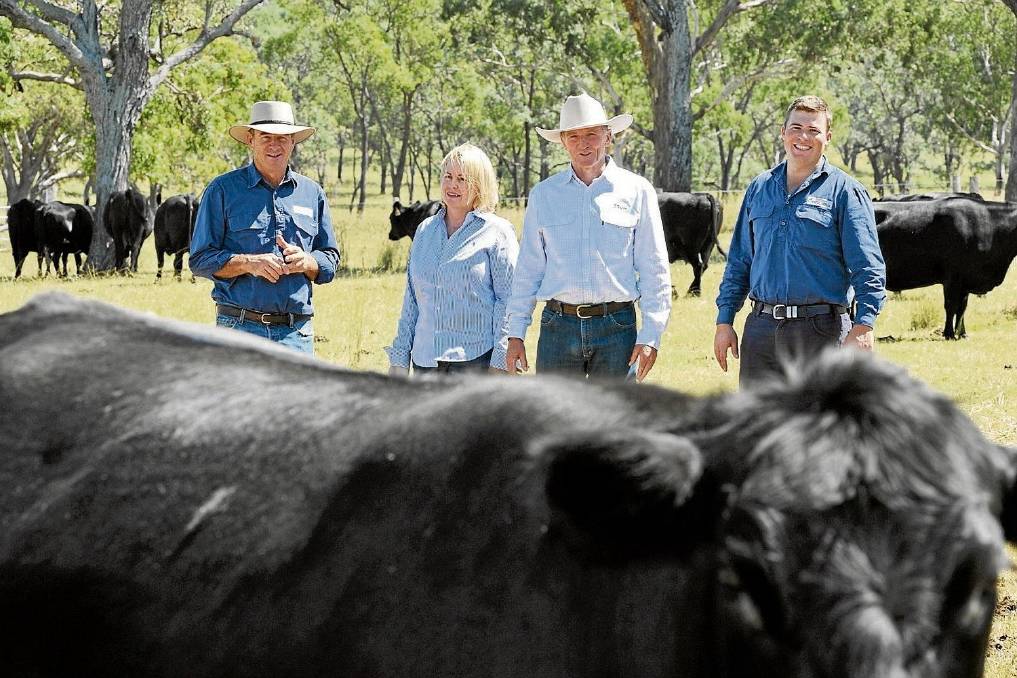 Jim and Jackie Wedge, Ascot Cattle Co, Warwick, with Bruce Arkins and Jonny Arkins, Genomix. The Genomix Beef Genetics Sale will be held as part of Beef 2015 in Rockhampton, as well as on AuctionsPlus through GDL.

IT is being heralded as the next big genetic gain for the beef industry.

IT is being heralded as the next big genetic gain for the beef industry. Genomix, a Toowoomba-based company headed by father and son team Bruce and Jonny Arkins, has developed an exciting new way to deliver Australia's elite beef genetics to the global beef industry.

On offer during the Genomix Beef Genetics Sale at Beef 2015 in Rockhampton is the opportunity to secure superior genetics from 35 studs from all over Australia.

Included in the catalogue's 112 lots representing 15 beef breeds are 29 flush lots, in addition to embryos and semen.

The Queensland Country Life-sponsored Genomix sale will be conducted simultaneously by GDL and on AuctionsPlus.

"The flush lots in particular are generating a very high level of interest in a number of countries including New Zealand, Canada and the US because it is the only time ever these herds have been opened up for other people to capture the genetic content directly from females," Bruce Arkins said.

"This is the beef industry's opportunity to tap into 50 years of genetic gains and some of Australia's previously unavailable elite genetic material.

The sale will be held over three days on AuctionsPlus, starting at noon today.

All lots are available at the same time.

Each lot will have a starting price and bids can be made at the Ruralco trade stand (C209).

Buyers can also bid independently by logging onto AuctionsPlus.

From 4pm-5.30pm on Wednesday bids can be placed at the Genomix Beef Genetics Sale in Hegvold Stadium on the Beef 2015 grounds.

Bidding on each lot will be extended to after 5.30pm if bids are received within a two-minute period prior to the previous bid.

As part of the Beef 2015 event, attendees will be able to sample donated beef from the Shorthorn, Hereford, Angus and Speckled Park studs, and assess first-hand the eating attributes of each breed.

Jonny Arkins said the buyers of the 29 flush lots would negotiate a time with the specific stud to flush the female of their choice.

The semen and embryos will be dispatched from Beef Breeding Services in Rockhampton.

"What is being offered is an opportunity to acquire some of Australia's best beef breeding genetics," he said.

"It's all about breeding cattle by replicating elite genetics in our herds. We are starting with the best genetic material and finishing with an even better article."

"The US exports $377 million worth of cattle genetics a year.

"Australia exports only $1.14m in total genetics for all animals.

"There is a tremendous opportunity to focus attention on the Australian cattle industry and on what we can offer to the world."