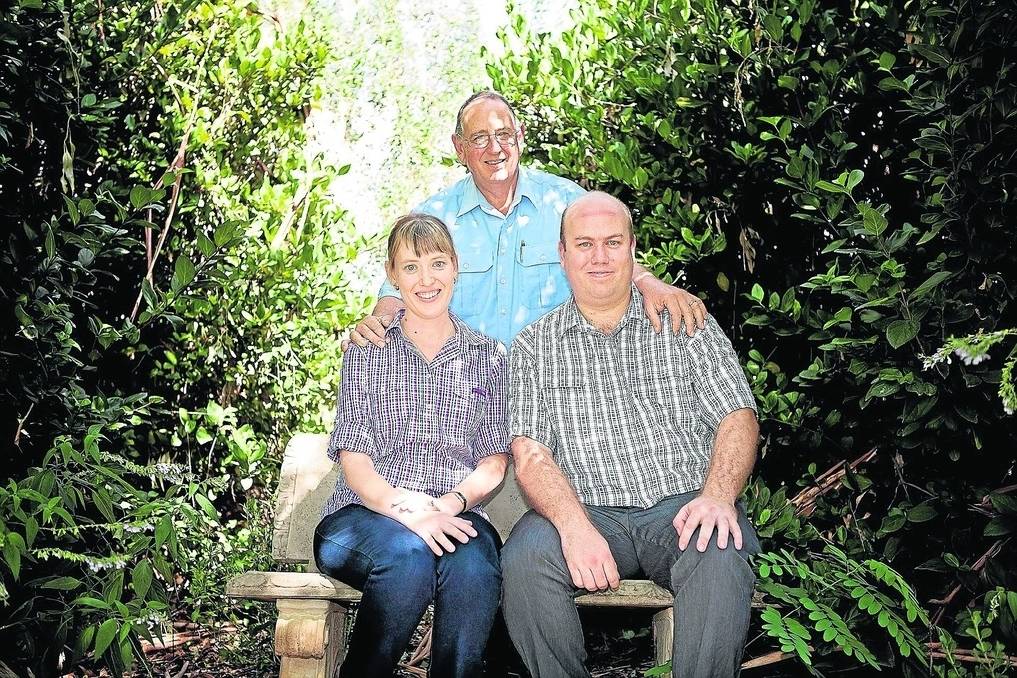 Andrew Youngberry with his children Katrina Hobbs and Gregory Youngberry.

SITUATED 101 kilometres north-east of Goondiwindi, on the southern edge of the Darling Downs, is Inglewood Farms - the leading producer of organic free-range chicken in Australia - owned by Andrew Youngberry, the unintentional king of organic chicken.

SITUATED 101 kilometres north-east of Goondiwindi, on the southern edge of the Darling Downs, is Inglewood Farms - the leading producer of organic free-range chicken in Australia - owned by Andrew Youngberry, the unintentional king of organic chicken.

R.M. Williams Agricultural Holdings owned Inglewood Farms from 2009 until it went into receivership in 2013.

This turn of events understandably left the community feeling vulnerable, as the Inglewood chicken farms are the biggest employer for Inglewood, employing 10 per cent of the town's population.

Thankfully, Andrew Youngberry and his family stepped in, taking over Inglewood Farms on November 23, 2013.

"It was like a sieve - it had lots of little holes in it and we simply began plugging the holes," Andrew said.

The family had no intention of becoming chicken farmers, but were familiar with Inglewood Farms, having provided the organic stockfeed.

Fifteen years on, they are now the largest organic stock manufacturers in Australia, providing feed for piggeries, backyard chooks and poultry farms.

Andrew refers to Katrina as "somewhat of a CEO for all the businesses".

The former shearer, cucumber grower and businessman admits the first few months were trying, but by the third month of ownership, Inglewood Farms had made a trading profit, an upward trend that has continued since.

"The first two months were a disaster, but we have turned the business around and it's holding its head above water. We've gone from a business losing millions every year to turning a profit."

There are complications with organic produce, including more expensive infrastructure and running costs, as well as continuous auditing to maintain the organic certification.

In the case of organic free-range chickens, the chickens grow slower and fewer chickens are stored in each shed.

The feed is more expensive and in what is probably the greatest issue facing the Youngberrys and similar producers, the feed is in short supply.

"It's the consumers who demand the organic, 100pc clean, chemical-free food.

"It is possible you just have to take your time - you can't produce it as the same rate as non-certified organic food."

Inglewood Farms requires 150 to 200 tonnes of grain a week, and that organic grain fetches $1000/tonne.

"Although organics is expensive in store, it's the law of supply and demand, and we can't get enough feed.

"Our feed costs are double and triple that of non-organic feed."

The recent drought has affected the supply of grain for feed. Inglewood Farms sources a mixture of three or four certified organic grains for their chicken feed.

So is it worth it?

"Eating organically means you absorb the full nutrients of the food you are eating, while avoiding the chemicals that your liver would otherwise need to fight against. It also tastes better," said Judy Woods, chef and owner of Woodsy's Whole Foods in Goondiwindi.

As of this week, Woodsy's will be the first local business to stock Inglewood Farms organic chicken.

While things have quietened down for Andrew since first taking over the business, he still works 14-hour days alongside 115 workers and his daughters Katrina and Julienne, as well as both their husbands and his son Gregory.

"The Youngberry's really are pioneers of the organic industry. An industry they had little or no knowledge of when they joined and they are now leading the way.

Proof that great management practices and hard work pay off," said Brooke Saxby the Executive Officer at the Goondiwindi Chamber of Commerce.

Where to for the future of Inglewood Farms?

"We want to at least double Inglewood Farms' business - maybe more. It needs to get much bigger to get stronger.

"Organics is a consumer-led revolution."

Andrew's daughter Katrina agrees there are many people who see the value in paying that premium for organic.

"They just need to see the price point become more affordable," she said.

So while the consumers may continue to lead the charge in the organic revolution, it is producers such as Andrew Youngberry and his family who are making the revolution a reality.