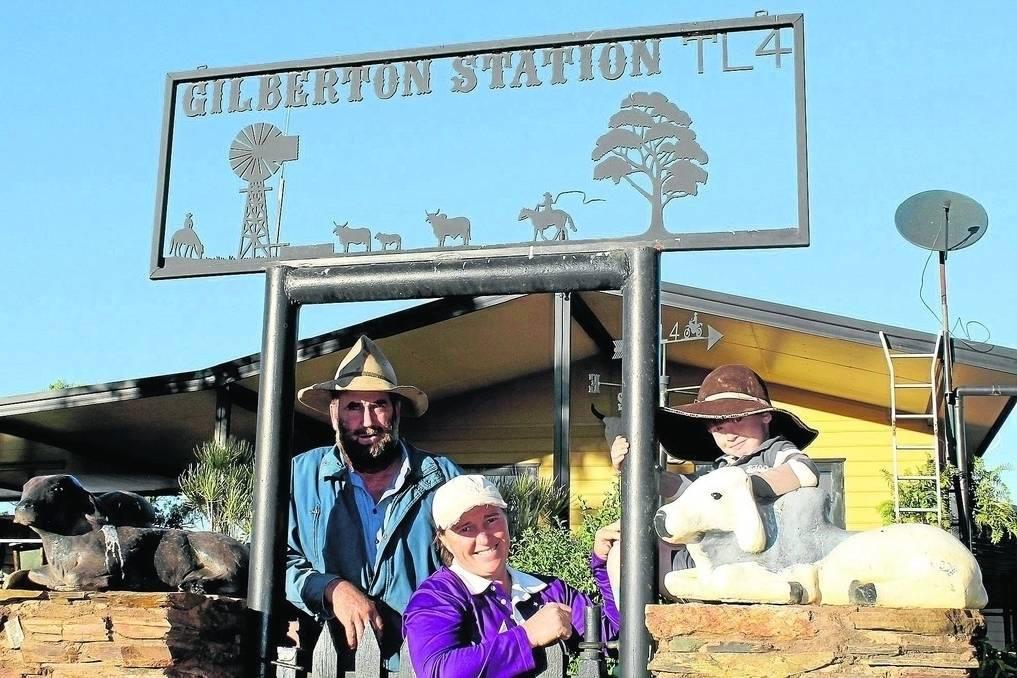 Rob and Lyn French, pictured with their grandson Robert, have diversified their Gilbert River cattle station with a luxury tourism option to debt-proof their business for coming generations.

CLOSE your eyes and go back in time to 1869 to a newly-formed goldmining town on the Gilbert River in Queensland's north-west.

CLOSE your eyes and go back in time to 1869 to a newly-formed goldmining town on the Gilbert River in Queensland's north-west. Imagine a collection of canvas tents and rough timber shacks housing 3000 Chinese and white miners, a softdrink factory, seven hotels, a commissioner's residence and even a hospital.

It's taken days to trek across mountain ranges to the remote goldfield where you're confronted by hills denuded of trees to feed hundreds of hungry steam engines in what is called the 'Ballarat of the North'.

Let the sound of bullock wagons fade away and go even further back, 30,000 years ago to when the Ewamian people were the only inhabitants, making tools, giving birth and painting on a rocky plateau surrounded by grevilleas, lancewood scrub and a natural rock spring.

Brush-tail wallabies dash across the jumble of ochre, quartz and granite boulders and smoke from small cooking fires wafts through the air.

Both scenes are part of a story described by archeologist Jacinta Warland as "internationally important for conservation of cultural and historical heritage" and it's a story that Rob and Lyn French are sharing for the first time with the world.

"We always knew we had something wonderful," Lyn said.

"A friend tried to get us to do something in tourism 20 years ago, and backpackers that come to help with station work.

"They all said, you don't realise what you have in your own backyard. You're so lucky, you should be utilising this."

"This" is the 35,612 hectare (88,000 acre) Gilberton station, 124km south west of Einasleigh in the goldfields country of the Gulf Savannah.

It's been home to six generations of the Martells-French family. Rob French's ancestor was a teamster who started a butcher shop and bought the property to supply hungry miners - and now they are showcasing their natural treasure in a unique fashion.

In September last year they opened up the Gilberton Outback Retreat, a luxury cabin made from local ironbark, ironwood and lancewood timber and stone slabs, perched on a cliff overlooking the sandy bank of the Gilbert River.

"It's even more spectacular in the wet," Lyn said, conjuring up a picture of rain drumming on the corrugated iron roof and a frothy torrent roaring below.

For a guest to be lucky enough to experience such a sight, they would have to chopper in and out but that would be no obstacle to the type of guest Lyn and Rob are attracting.

For a price of $950/night, their guests have an all-expenses paid experience of the bush.

They can either throw themselves into the various attractions on offer - panning for gold and exploring the remains of the township that existed for a five-year burst of gold fever, fishing, kayaking or mountain biking, watching a cattle station at work, and viewing ancient aboriginal artefacts and unique petroglyph carvings - or they can just relax and drink in the tranquillity.

By day, birds lazily circle on currents of air close to the cabin balcony and at night the Southern Cross turns over in a star-studded display that guests can view from beneath their bedcovers.

The motivation behind such a bold tourism venture could be a future for their children as native title negotiations are preventing the Frenches from expanding their grazing operation.

"We need an Indigenous Land Use Agreement (ILUA) because of our occupational licence tenure. We've been trying to get this for 12 years but haven't made any progress, unless we hand over $80,000," Lyn said.

"The traditional owners from here have no harmony. Some are so willing to care about country and others want to keep going back to boards.

"There are government templates; it could be done."

The upshot is that no bank in Australia will loan the Frenches money, according to Lyn.

It took them three years to save enough to build their first luxury cabin.

In the six months since opening, the retreat has hosted 16 guests, two from the UK and Switzerland, but most of them homegrown and looking for something memorable.

Once the venture has proven itself another two cabins will be put up in equally secluded spots, and a chef employed.

At the moment guests can either prepare meals in the comfort of their cabin from a selection of gourmet produce provided, or dine with the French family.

Although Gilberton has an airstrip, most guests choose to drive the 450km from Townsville or 550km from Cairns. Lyn surmises that getting to experience real isolation is part of the adventure for most people.

There's no TV, internet coverage or mobile phone reception, but guests are happier sipping Moet champagne and watching a full moon rise on the summit of Mt Nation than posting status updates.

"We could see the writing on the wall with the cattle industry 10 years ago. Gilberton isn't big enough for two families to exist, just on cattle," Lyn said.

"We've seen so much volatility with cattle prices and we didn't want to leave the kids with a debt."

It's early to say yet, but it looks like the Frenches have struck gold.