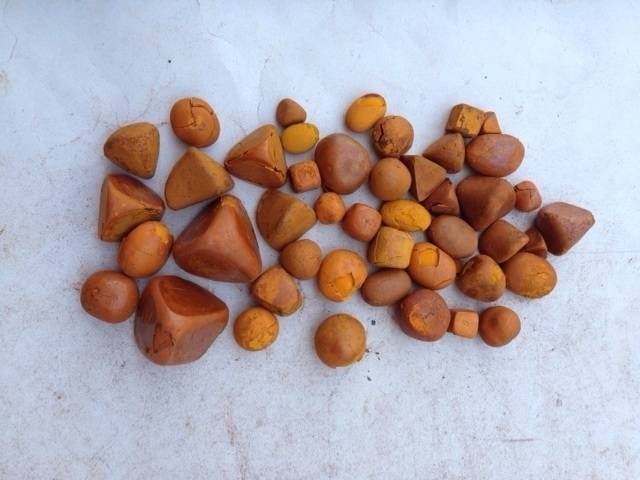 Cattle gallstones vary from the size of a pea to a golf ball and come in different grades, similar to gemstones.

LAST week’s alleged heist of cattle gallstones from a Toowoomba abattoir may have had a few beef producers sit up and wonder.

LAST week’s alleged heist of cattle gallstones from a Toowoomba abattoir may have had a few beef producers sit up and wonder at the potential goldmine in their cattle’s stomachs.

According to police, the gallstones are prized in Eastern medicine and can sell for as much at $20,000 a kilogram.

A 38-year-old man was charged with stealing the gallstones and will appear in the Toowoomba Magistrates Court on June 23.

Investigations revealed the stones were stolen over a period of at least six months and believed to be of considerable value. Detectives executed a search warrant on a Cranley address and recovered the stones, the police said.

While the values quoted may have had some people look at their cattle in a different light, one Gold Coast-based gallstone trader, who declined to be named, said the $20,000 quoted was the sale value on the Asian retail market.

“They are not going to make you tens of thousands of dollars, and you will need a lot of gallstones to make a kilo,” she added.

Since the story became public, her business has been inundated with calls, even from people willing to sell their own gallstones.

She only deals with cattle, and she has a few tips.

“If you are killing your own animal for your own consumption, the animal that has a yellowing hoof is more likely to have gallstones than one that doesn’t.”

And once you retrieve the stone from the gall bladder, the way you preserve it is key.

“They are 75 per cent moisture, so when they are retrieved there is a drying process and they have to stay out of the light because they are photosensitive.”

Gallstones are like a sponge, so they have to be continually turned over to prevent the moisture from pooling at the bottom, and it can take between six and eight weeks to dry.

Once they are mouldy, they are no good, the trader said.

“They go from stones that are smaller than a pea to those that are up to the size of golf ball, but probably not as big as tennis ball.”

The trader, who has been in the business for over 30 years, collects the gallstones from abattoirs, sorts them and grades them “like a gem stone or a pearl” and then sells them.

While gallstones may be a little known by-product, meat processors have long looked at markets to use every part of the carcase.

According to Meat and Livestock Australia, offal items, hides, pharmaceutical extracts and rendered products can account for as much as 25 per cent of the saleyard value of some cattle.

Last year, total beef and veal offal exports were a record 162,686 tonnes shipping weight, 23 per cent above the five-year average and a trade worth $515 million.

The three key markets dominating offal exports are Japan, Hong Kong and Korea, taking up almost half the total shipments.

Hide export value last year increased 38 per cent year-on-year, to almost $600 million, while rendered products – including sheep and cattle – were worth over $600 million.

NB: In the print edition of Queensland Country Life, Oakey Beef was incorrectly named as the processing plant the gallstones were stolen from.