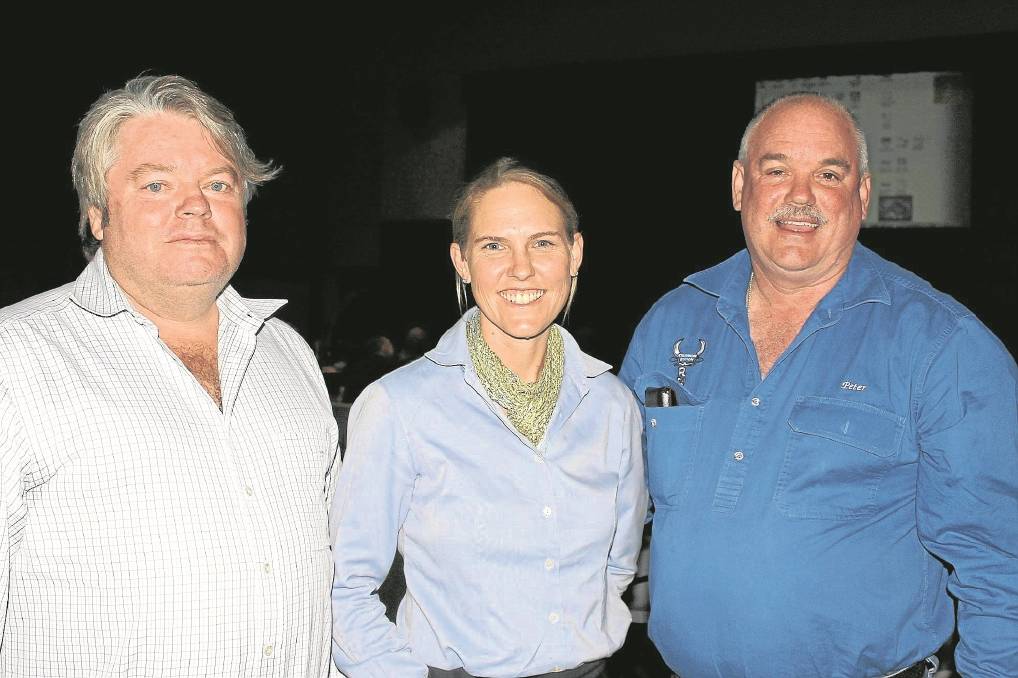 IRRIGATED agricultural crops are already part of the landscape in far north Queensland, thanks to a number of early adopters.

IRRIGATED agricultural crops are already part of the landscape in far north Queensland, thanks to a number of early adopters, and three of them shared their experiences at the Northern Australia Food Futures roadshow in Hughenden.

Peter Anderson manages the cropping developments at Strathmore Station near Georgetown, and said an application to put in a 3000ML dam had to be ticked off with six or seven departments, often duplicating paperwork in the process.

His call for a one-stop shop that would assess development applications, water, soil and environmental issues, and walk people through the process, was widely applauded.

At Richmond, where Corbett Tritton has cleared 540ha at their Meadowlands farm, disappointment revolved around the way the past state government water release was undertaken.

He was represented at the roadshow by Sarah Westaway, who said he wanted to see incentives to encourage developments such as his.

“It would be better to have 10 Meadowlands farms that are being used, rather than a handful of lic­ences in big corporations that aren’t using them,” she said.

The Tritton family has built a 4500ML storage, and is trialling and growing a wide range of crops, including cotton, mungbeans, forage sorghum, forage corn, chickpeas, pigeon peas and hay.

For Paul Ryan at Olive Vale on Cape York, having experience of industries other than grazing has been beneficial to Olive Vale Pas­toral’s development, enabling it to bring in earthmoving expertise or business acumen gained from starting Choice Petroleum, for ex­­ample.

He described the support re­­ceived by the Department of Agriculture to date as “excellent”, and said that locals at nearby Laura were 100 per cent supportive.

Having a town on the outskirts of the property and mobile phone access meant they were able to keep young staff, and a bitumen road now gave them year-round access to markets.

“We do our first round of mustering in January now, so our cattle are all gone before others start,” he said.

While roadshow speakers from the Northern Territory cautioned against getting too large in the early stages, Paul said they needed the economy of scale to make their sor­­ghum and chickpea venture work.

Olive Vale Pastoral was granted a permit in January to clear 32,000ha of land, which has been opposed by conservation groups and is now the subject of an investigation ordered by Deputy Premier Jackie Trad.

Paul said a number of contract farmers from as far apart as Mackay and Nyngan had viewed the development, and all said a minimum of 1000ha was needed to make plans, which included upland rice, viable.

To the south, the Harris family at Strathmore has so far farmed 2500ha of land after being granted a 60,000ha clearing permit.

Despite enduring three of their driest years on record, they have still taken some sorghum off and Peter Anderson said farming in the area was “do-able”.

“We will go close to covering the cost of planting this year through the extra weight we are putting on our cattle,” he said.

With a 750mm annual rainfall, the Harris family’s initial plan was to do wet-season farming, utilising markets on the Atherton Tableland and export for any volume above that market.

Having a large cattle operation behind the venture helped.

“We’re a cattle operation but we needed to do something to make the business viable,” Peter said.

“We decided the future was in the north but seven years later, we’re still trying.

Sarah Westaway said despite having an ordinary season in 2015, the Trittons had had a flow in the Flinders River via the Dutton River, and were full steam ahead with plantings.

Some 330ha was planted to mungbeans, and enough silage has been made to feed 2500 head of cattle and have them put on 200kg.

At the moment, 200ha of chick­peas are going in.

“Despite the ordinary season, it’s given them so many options,” Sarah said.

“The key points are that development costs were low, the land was affordable, there were niche marketing opportunities, and they could value-add to existing industries.

“They could either plant fodder that suits beef or high-value low-volume crops that can be transported a long way.”

This includes mungbeans that have been sent to Biloela.

One challenge identified by Corbett was being a sole operator and not having access to harvesting machinery. For Paul Ryan, it was finding money to finance projects.

“Banks don’t place any value on development applications,” he said.

Attracting labour is the main challenge for Peter Anderson, being in a remote region without access to mobile phone signals.